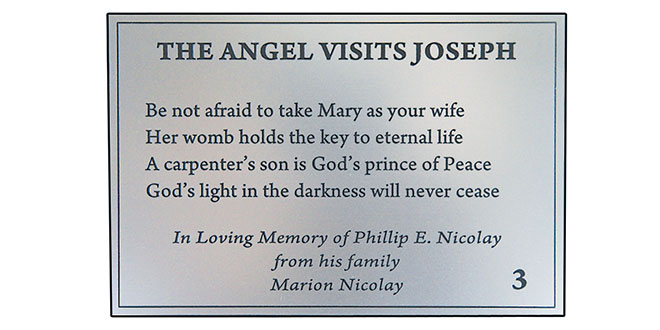 The Artists in Residence (AIR) at St. Mark’s Episcopal Church celebrated the season of Advent, the coming of Christ, last year by creating drawings which were then etched in glass. Acclaimed glass artists Stan Saran and Don and Elaine Jones masterfully took the designs and etched them into windows. The project, was the fifth project of AIR and was entitled, “Incarnation Windows.” The windows were then hung with a custom built hanging system and when season ended, they were stored away.

The project was a culmination of the effort of many participants, from Father Kyle, a strong supporter of worship through the talent of parishioners, to the artists who created the designs, through the expert skill of Stan and Don who etched and produced the 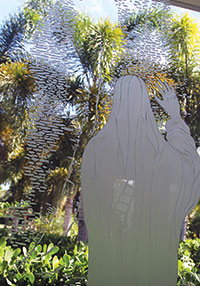 windows. Even those willing to assist in hanging each window and those who clean them to be sure they are perfect for the next service are recognized for their participation in this parish wide undertaking. It is through the combined efforts and talents of so many that the windows were ready for the celebration of Advent.

According to Stan, the dedication last year was quite moving. Each window was covered by a white cloth. Father Kyle wrote verses for each window which Shane Totten put to music. As Shane sang each verse, the veil was removed from the corresponding window. The etched Advent windows were removed January 5, 2013 in preparation for the hanging of AIR’s stained glass Epiphany windows.

Since last year, the windows have been in a specially 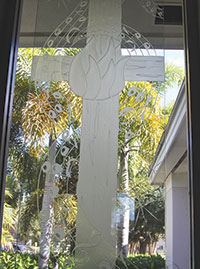 designed storage container on wheels. Recently, they were prepped to be rehung at the church.

Coincidentally, Don and Elaine, who had since moved to West Virginia, contacted Stan. They were both available over Thanksgiving week and Stan called the church office to see if they could help assist in installing them this year. The arrangements were made and both artists participated in hanging the windows for Advent.

Stan and Don’s return to St. Mark’s provided a unique and happy reunion with Father Kyle and Janet DeAnna, AIR Co-chair. It was a symbol of peace and togetherness for the holidays. Janet said, “There is something so special I think, about people from all over coming together just to get these windows hung.”

For more information on the etched windows, go to: www.coastalbreezenews.com/2013/12/23/st-marks-unveils-etched-art-for-advent/