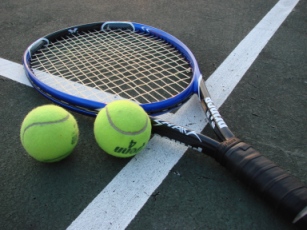 When we analyze good doubles teams, the one true barometer of success is how much one teammate trusts the other. Look no further than the Bryan twins of California, who are the best tandem in the world rankings. They communicate on every point, they switch with ease, and they show their appreciation for one another with a huge smile after most points.

Unfortunately, when we view USTA amateur tennis or other local leagues, it is not obvious that one teammate fully trusts his sidekick on the doubles court. Specifically, when one player decides to make the bold move and poach, too often, his buddy does not move over or switch to cover the open court. Moreover, when a lob is hoisted by their opponents and only one player should field the ball, all too often, the mistrusting player also moves back for the same ball.

This particular problem, when no one really trusts his partner, is seen over and over in the 2.5 levels up to the 3.5 levels of tennis.  So, what is the remedy when both doubles players go for the same balls and almost run into one another and there is complete chaos during the match? The clear solution is to send these confused players to their club to join a doubles clinic.

The biggest problem for most inexperienced doubles players is their failure to know where to stand on the doubles court. For example, when the partner is serving, the net player must stand near the doubles alley but not on top or in the alley. Too many new players are so fearful of the return alley shot that they over-compensate and position their bodies smack in the middle of the tram lines or alley.

Another example of poor placement occurs when the receiving team is returning serve. Where does the net player stand when his partner is about to return? In most cases, the net player should stand near the middle on the service line. Once doubles players become familiar with their court placements, they will slowly learn to trust their partners. In other words, if both players are always standing in the right places on the doubles court, they are more apt to know which ball to pursue. Soon thereafter, their team trust will build and their doubles games will be more fun and successful.

Doug Browne is beginning his 26th year as Director of Tennis at Hideaway Beach Club on Marco Island. He has been associated with the USPTA for 25 years, and has been playing, talking, and teaching tennis for most of his life.  He may be reached at DBrowne912@aol.com.