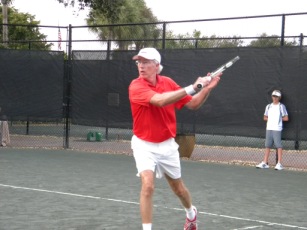 One of the primary duties of a tennis coach is to either coach or view doubles competitions several times each week. Recently I have seen numerous CTA – USTA adult doubles and mixed doubles matches along with several national junior doubles events.  In our new world, the most stunning change in doubles is the emergence of the groundstroke; the one up, one back formation is rising in today’s doubles game.  This trend is not what I prefer but it is worth noting as it is so radically different from the early years of the doubles era.  The good news for traditionalists is the best doubles team in the world, the Bryan twins from California prefer the old style; serve and volley and return and try to move in to intimidate the opponents.  However, in the modern game it is essential to move into the net with a lethal approach shot or look out!

The new rackets and strings enable players to hit wicked groundstrokes which may prohibit the net rusher from dominating up close. The key question is: what is the best way to play doubles if the players are at the 2.5, 3.0 or 3.5 levels?  First, let’s examine a few different strategies that teams should explore before hitting the court when they compete on a soft tennis court or a clay court:

The only way one is able to understand which style to pursue is for the player to understand fully his ability level – that’s the real deal-breaker.  Although most of our tennis playing population plays at the 3.0 area, unfortunately, most players would rate their ability at the 3.5 or 4.0 levels. Therefore, it may be virtually impossible to know which style to adopt. The best place to start is with the one up/one back formation to which it is easier to adjust. The serving team needs to focus on hitting a high percentage of first serves: it eliminates most of the pressure.  Furthermore, the serving team should avoid the A serve or the alley serve. The bottom line for the server is to hit the ball in areas that may encourage his partner to volley.  When the server hits alley placement serves, the net partner must shift to the sidelines to cover the return.  Finally, the serving team, that plays one up, one back is not pressed to run into the net to volley.

On the returning side of the tennis court, it is wise to hit most returns crosscourt. Furthermore, the returning team must implement the use of the return lob; it is designed to confuse the serving team and is a high percentage shot for most players.  Now, in order to understand the best style for you and your new partner, you must be able to understand two ideas: strengths and how to cope with weaknesses.  If a player understands that he is impatient, it is intelligent to return serve and move into the net.  Conversely, if the player is a backcourt star, it is prudent to return and stay near the baseline or no-man’s land region.  As we delve into whether a team is capable of the Australian or French Open formations, we must continue to examine overall capabilities. As we continue to explore what is best for you, please give us your best shot: be truthful about your on-court skills.

On a daily basis, I work with some of the most talented coaches in the game and if our students are completely accurate with their game assessments, they will undoubtedly improve quickly.  The essential doubles strategy guide part two – next time.

Doug Browne is beginning his 26th year as Director of Tennis at Hideaway Beach Club on Marco Island. He has been associated with the USPTA for 25 years, and has been playing, talking, and teaching tennis for most of his life. He may be reached at DBrowne912@aol.com.