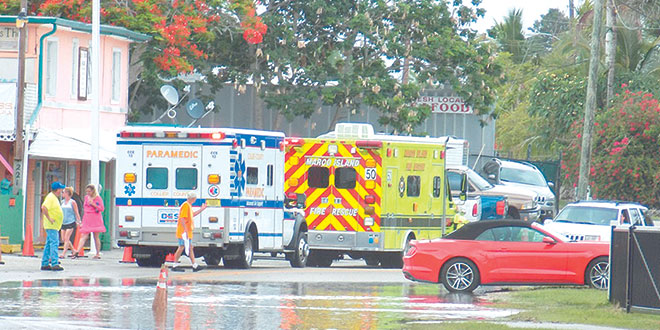 This column has chronicled an almost monthly series of debilitating floodings on Goodland Road, the community’s only access road. In six out of the last 11 months, beginning in August, 2015, the flooding prevented many from driving on the hubcap deep Gulf waters covering large portions of the road. Engineering reports commissioned by the City of Marco Island (CMI) confirmed that the road was being undermined by the constant flooding, and that it needed to be rebuilt and raised 2 to 3 feet. CMI addressed the problem by patching potholes and delaying remedial action. Appeals for action by the Goodland Civic Association to the City of Marco Island (CMI) and Collier County (CC) were also reported in this paper. On June 5 and 6, 2016, the latest in this series of floodings occurred. This one was caused by Tropical Storm Colin as it passed far to the west. High tide here was at 2:15 PM on June 5, and 3 PM on June 6. I went over to Goodland Road on both days to record what went on there.

On June 5, a Sunday, the forecast heavy rains did not occur here. The overcast skies held off. As far as I could tell, the southeast wind was holding steady at about 17 mph (as forecast). Portions of the road were covered with as much as 4 to 6 inches of salt water with 12 to 18 inches in lower places. Traffic on the road was moderate but steady, mostly due to people coming in to Stan’s for the 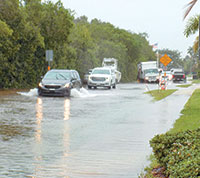 weekly jamboree there. Motorists were slowed to a crawl in both directions with bottlenecks forming as the vehicles weaved from side to side trying to avoid the deeper water and the drenching of their undercarriages and engines. “When are you going to do something about this?” a motorist hollered at me. Many of them had become accustomed to my taking pictures of the flooding in past months. “I don’t want to ruin another of my trucks,” a passing local merchant complained, “I’ve got to drive this road every day.” The merchant, Jay McMillen, who owns All Marine, a boat repair business, was going particularly slowly – maybe 3 mph, barely making a ripple. McMillen tows boats in need of repair to his shop in Goodland and then tows them back out again. John Hackett, a local Goodland painter, had to replace his van last year when the rusted undercarriage literally fell out. He blamed much of it on Goodland Road “There were days when I dreaded driving on that road,” John had told me, “I knew what that salt water was doing to my van, but had no choice.”

Then, at about 2:30 PM, two CMI EMS vehicles came around the bend, lights flashing. They too were stuck in the slow moving two-way procession. There seemed no way they could get through or around the funereal procession of traffic which was backed up in both directions. Minutes later, the EMS vehicles finally made it through the remaining 150 yards to Stan’s, from whence the 911 call had come. A Stan’s employee

advised that one of their customers had symptoms of what appeared to be heat exhaustion. It was an extremely humid day. I went inside, where the EMS crews were administering aid to a man and a woman, neither of whom was in extremis. One of the firemen acknowledged that it had been slow going coming in to Goodland. “It wasn’t so much the water,” he said, “It was the slow moving traffic.” He acknowledged that even in the absence of traffic, a speedy entrance into Goodland would have been risky. “When a road is covered in water, there is a risk of hydroplaning and skidding when negotiating turns,” the fireman told me. It occurred to me that the winding nature of Goodland Road would make this even more likely. Steve Gober, the owner and manager of Stan’s, figures that the EMS crews had gotten to Stan’s in less than 10 minutes. “This type of flooding has been happening ever since I got to Goodland, 37 years ago,” Gober told me. He grants that in the past nine months, the floods have been more numerous. “This is what can be expected during periods of El Nino,” Gober said. “When El Nino subsides conditions will return to normal.”

The Marco Island Fire Department (MIFD) maintains a superb EMS division, which has served Goodland extremely well. The EMS crew almost always makes it down here in 10 minutes or less. Five years ago, I was personally involved in a case where I have no doubt that the MIFD probably saved a woman’s life. The 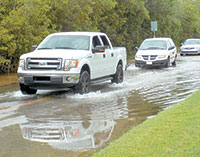 Outbound cars slow to about 5 mph to avoid saltwater splashing up into their undercarriages and engines. (6/5/16, 2 PM)

woman was in a coma, turning blue, gasping for air, and barely breathing when I called 911. The dispatcher advised me to start CPR, which I did until the MIFD EMS crews arrived less than 10 minutes later. They quickly gave her oxygen, administered tests and aid, and got her out to Physicians Regional Hospital, where she was put on life support and sent to the intensive care unit. An ER doctor told me that the woman might never pull out of the coma. (She awoke, four days later.) One of the EMS crew told me that had they been five minutes later, the patient might not have survived. In Goodland, as sea levels slowly rise, we are haunted by the specter of a flooded and clogged Goodland Road delaying or even preventing the entry of the MIFD into our village. Delay on June 5, 2016 was caused by an only moderately and partially flooded road.

Monday, June 6th the flooding was much worse. It seemed like the entire road was underwater. In my 10 years here, it was the worst I had seen since Tropical Storm Isaac in August 2012. On this day, Tropical Storm Colin was coming ashore, far to the north at Florida’s elbow bend. Once again winds held steady at 17 to 20 mph, and except for a brief shower at 3:45 PM, the precipitation amounted to no more than a drizzle. High tide occurred at 3 PM. Water was literally rushing in waves from the north side of the road and was boiling up out of 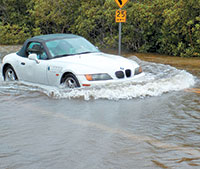 the two drains on the other side. These drains were installed at two of the lowest spots on the road in order to prevent the accumulation of rainwater on the roadway. This works well enough most of the time. However, when rainstorms occur during the high monthly spring tides, seawater comes crowding out of these drains and none of the rainwater can escape. So yes, we have flooding from rain storms also. These drains are increasingly below sea level, causing more harm than good. On June 6th as much as 24 inches of water covered the road in its lowest spots – 6 to 12 inches in others. Most of the road, from the Goodland water tank to Stan’s was under water. Motorists were pulling off and parking at the water tank, not willing to proceed into Goodland. One took off his shoes and walked in, needing to check on his boat. Workers at the Calusa Island Marina did not deem it safe to leave until 5 PM. One worker with a small car stayed until 6:30 PM.

It is worth noting that no other flooding within the city limits of CMI was reported during these two days. Once out of the maelstrom that was Goodland Road, it was clear sailing.

Next edition – The County attempts to break the log jam. The City responds.