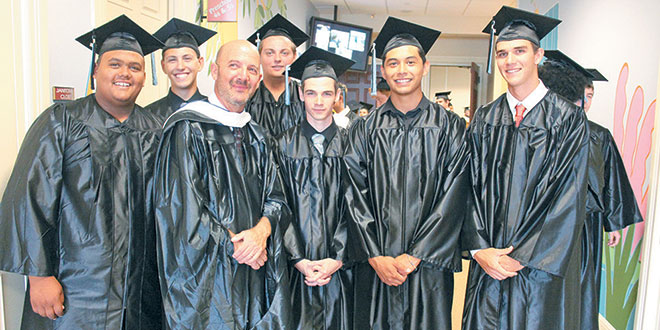 More than 400 family and friends packed the Family Church for the Marco Island Academy (MIA) graduation on June 3.

Laughs, cheers and tears made for a special occasion.

Valedictorian Stephen Vale brought about the first jolt of laughter when he told of “Not having a normal high school experience.”

“It was definitely tough the past two years, missing out on all the fun and experiences at MIA.   Due to his youthful looks, Vale said, “On the first day, of every class, the college students were wondering why a middle-school student was sitting next to them.”

He showed them. He graduated with an associate degree in psychology before his high school graduation.

Salutatorian Haley Havemeier caught the attendees off guard, describing her feelings when she found out that Melissa Scott would become MIA’s principal, saying, “I’m not going to lie, I was a little disappointed.” Then a sigh of relief and laughter when she said, “I heard students talk about how fun and engaging her English classes were and I wouldn’t have that experience. It is clear that she cares deeply about our school and students.”

It became sentimental and more when Kirby Rients, English teacher, took the podium. He was among the first teachers at MIA and is returning to Minnesota.

He fought back tears, as did others, as he spoke on the experience.

“This is where it all started and where it will conclude,” he said. Family Church was the first home for the school’s opening days.

He recalled how students had lunch in the church auditorium where graduation was held. How MIA crammed five classrooms in confined quarters.

“Now, here you are, ready to move on to the next level that is all part of life,” he said. “I am proud of each and every one of you. I love you. You are all part of my life and I am a better person for it. This is the best gig I ever had.”

Petrocelli’s life changed forever when a drunk driver plowed into his bedroom, killing his wife. He spoke of being in an abyss when others showed him that he mattered.

“Anger corrupts your heart. Let go of those who wronged you,” he said. “Give a hand up, not a handout.”

Chris Zumstein, school counselor announced students’ names as they received their diplomas. Once completed he said, “It (the tassel) goes from right to left over your heart, it will remind you of your alma mater.”

Principal Scott thanked the students for “Teaching me more than you learned. You learned about your true selves and allowed me the same.”