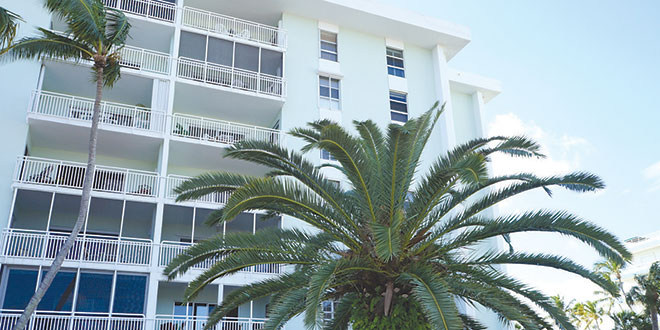 Emerald Beach has a place in history as Marco Island’s first condominium.

Hundreds of curious islanders attended Emerald Beach’s 50th Anniversary open house on Sunday, January 17, hoping to learn more about the history of Marco Island’s first condominium and take a peak inside at its newest renovations.

The seven-story Emerald Beach was developed by the Mackle brothers, and designed by architects Herb Savage and Jim Vensel. Its beach location, amenities and design made the building very desirable. After it was completed in May 1966, the building sold out within one year.

Emerald Beach residents joined guests from the Marco Island community in the building’s first floor common area, where they enjoyed lively music and gourmet food. Emerald Beach recently renovated its first floor and the celebration was the perfect opportunity to show off the many changes. Original pieces of furniture, such as a number of 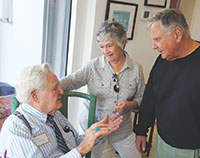 colorful green chairs, were updated and incorporated into a new, more modern décor. Photographs of Marco Island, years past, as well as some special historical documents were found throughout. Guests lined up, as if in an art gallery, to see all the pieces of history on the walls.

Jerry Rusch, president of the board of directors for Emerald Beach, explained the design theory of the renovations, saying, “We tried to tie in the old with the new, and keep the flavor of the building.” He also consulted with original Emerald Beach architect Herb Savage on the plans for renovations. Herb was at the celebration, and guests had a chance to speak with him, and hear him speak about Emerald Beach and its place in Marco Island’s history.

Bob and Karen Vassolo, residents for 20 years, had nothing but 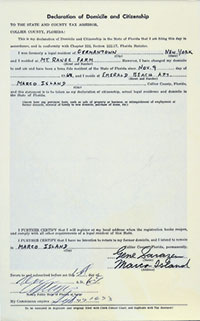 Gene Sarazen’s Declaration of Domicile was one of many historic documents that guests were able to view at the Emerald Beach anniversary open house.

praise for Emerald Beach. Years ago, they had trouble finding the perfect condominium. They had looked at many places but hadn’t found exactly what they were looking for. They had a friend at Emerald Beach that told them about an available unit. Bob says, “Units back then sold by word-of-mouth.” As soon as Karen stepped on the lanai, the Vassolos were sold. They told me, “Herb Savage did such a wonderful job on the design,” that all “the units are unique.”

Board Member Susan Ediss was in charge of organizing the celebration, which took months of hard work and planning. Local musician Johnny Angel was there to entertain as guests enjoyed fine culinary treats prepared by Daniele Crandall, a French chef honored as a Chevalier by the French government. Speakers included Herb Savage, Robert Mackle, Jr. and Mary Ann Sarazen.