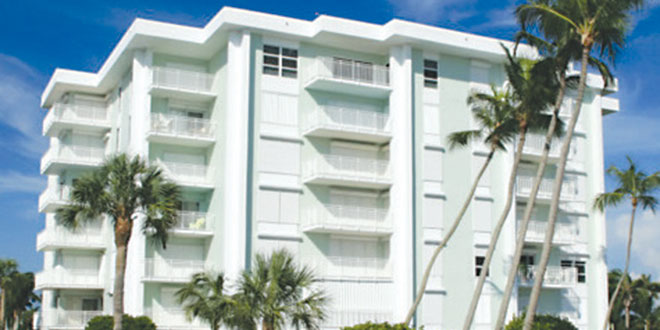 The complex celebrates a golden anniversary this year.

Emerald Beach entrenched in Marco Island history, developed by Florida’s Mackle brothers of the Deltona Corporation, who blended the island’s great natural beauty into a master plan for tropical living. Completed in May of 1966, this first condominium on the island was virtually sold out within a year. The seven-story condominium is located at 500 Saturn Court. Six of the eight apartments on each floor have an ocean view.

When the Mackle brothers completed Emerald Beach, the island’s first beach condominium was all top of the line. Built of heavy concrete blocks to withstand hurricanes, outfitted with solid brass hardware, eight panel wood doors and crown molding, the seven story building sat directly on one of the most pristine sand beaches in the country. Architects Herb Savage and Jim Vensel made sure that the residence for 48 families was the very best.

shortly after the Voyager Hotel, which is the current Marriott, Emerald Beach cost $1.5 million to construct and sold out within a year. When Emerald Beach opened in 1966, the prices of the one and two bedroom units ranged from $19,900 to $49,500. Today, you might have to pay quite a bit more for this little guy that stands tall amid the 23-story buildings on the beach.

To honor Emerald Beach’s 50th anniversary, Savage will join family members of original owners, Marco Island government officials, current owners and scores of Marco residents at an open house on Sunday, January 17th from 1- 4 PM. The afternoon’s festivities will include music by local artist, Johnny Angel and refreshments. Visitors will be able to view the newly renovated first floor that incorporates some of the original furniture and terrazzo floor in its enlarged card room, renovated bathrooms and tropical community room. A virtual museum of the construction of Marco Island is visible on the walls.