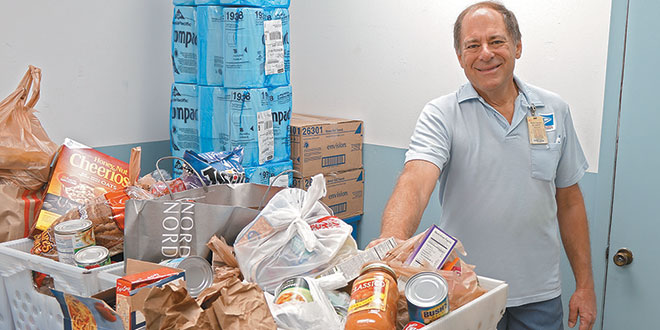 Elliott shows us the growing pile of food drive donations at the post office. Photos by Jessica Hernstadt

For 29½ years Elliott Mascoop has worked for the United States Postal Service. Some people in his position might be counting the days to their retirement. But Elliott is busy thinking of ways he can do more to help others, and then acting on them.

Elliot spearheads local efforts for the National Association of Letter Carriers Food Drive, “Stamp Out Hunger,” an organized food drive of grand proportion carried out by postal workers throughout the entire country. In fact, it’s the largest one-day food drive in the United States, in its 24th year helping the hungry.

Through Elliott’s leadership, Marco Island’s Stamp Out Hunger collects 30-33,000 pounds of donated food per year. All the food that is collected by Marco’s letter carriers is donated to the Collier Harvest Foundation (our local food bank), a non-profit agency that helps feed thousands of Collier County families in need. 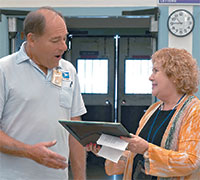 His face says it all! Lynne Minozzi surprises Elliott with the Minozzi Service Award.

Executive Director Connie Preu describes Elliott as “one of the most dedicated” food drive volunteers that she has ever seen.

The Marco Island Noontime Rotary Club agreed, and awarded Elliott for his efforts.

One early morning at the Marco Island Post Office, while Elliott was busy at work, members of the Noontime Rotary Club quietly snuck in to surprise him with the Mike Minozzi Service Award.

Noontime Rotary Club President Lynne Minozzi presented a stunned Elliott with the award, for his work as the Marco Island coordinator for the food drive. Elliott was genuinely surprised. “I had no idea!” he said.

A crowd was gathered to honor Elliott, made up of Rotarians, Stamp Out Hunger Food Drive volunteers, and friends. They were joined by Postmaster Michael Gomez and Elliott’s many co-workers.

Elliott said that he is “amazed and deeply appreciative of this award.” He was humble, and reminded us of the team

A group of postal workers, Rotary members, volunteers and friends were there to honor Elliott.

effort involved, including postal workers and volunteers. Rivka, Elliott’s wife, works together with Elliott and leads efforts, such as getting the word out about the food drive, finding and coordinating volunteers, and food donation bin delivery to all the Marco Island condominiums.

Although he has done so much already, Elliott will not rest on his past accomplishments. In fact, he seems even more inspired to help, saying, “In the future I will try to do even more in the community. I love Marco Island!”

The 2016 National Association of Letter Carriers (NALC) Food Drive is currently in progress. The Marco Island Post Office will accept donations of canned and dry goods, both at the post office and in donation bins throughout the island. Mark your calendars for Saturday, May 14, 2016 to place non-perishable food items at your mailbox to be picked up by postal carriers and volunteers. For more information please call 239-298-1339 or 239-595-2932.