Eligible: A Modern Retelling of Pride and Prejudice 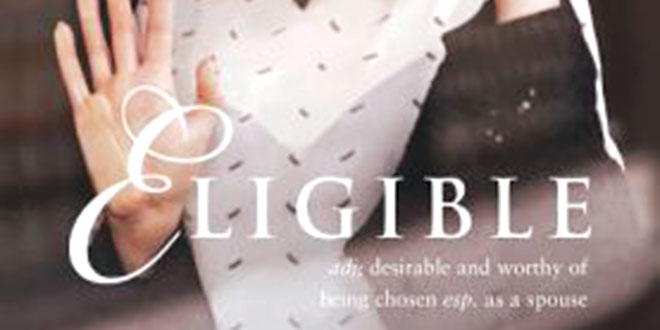 “No two persons ever read the same book.” – Edmund Wilson

The good news is that “Eligible” is not one of the “Gone Girl” or “The Girl On The Train” wannabes that are pervasive these days. The other news is that while it is a satisfying read, it is not even a shadow of Jane Austen’s “Pride and Prejudice,” the classic satire on the social mores of early 18th century England. P&P purists, be forewarned that you will find no subtlety and very little romance in “Eligible.” Sittenfeld’s satire is fairly in-your-face and quite humorous. Austen’s subtlety and romance have no place in modern America. Understatement is not a term that will be used in history to describe our American era. I enjoyed “Eligible.”

“Eligible” is set in present-day America with most of the story taking place in Cincinnati, the hometown of the Fred and Sally Bennet family. Instead of landed gentry, the Cincinnati Bennets belong to a country club, the center of their social life along with Sally’s Women’s League. They live in a very large home that Fred’s parents sold to him for one dollar. Due to Sally’s shopping addiction and Fred’s mind numbing irresponsibility, the house now has two mortgages, they are behind on payments and on the verge of bankruptcy.

Jane is almost 40 years of age, and Liz is right behind her. They live in New York City, each with her own apartment and own career. Each still single. Mary is approximately 30, living at home with her parents and working on an online college degree, her third degree. She has never held a job and her solitary behavior leads her younger sisters to assume she is gay. Every Tuesday she has a mysterious outing, refusing to tell anyone where she is going. Kitty is 26 and Lydia 23, also living with Fred and Sally. They are as spoiled and irresponsible as Austen’s characters of the same names.

Not innocent and no longer living in a protected world, the Bennet girls are often foul mouthed and despite close encounters of many kinds, none of them has found love. Jane has embarked on intrauterine insemination (iUI), realizing the “expiration date” on her ovaries is fast approaching and she may never find the right man. Liz has been carrying on an affair with a married man – Jasper Wick – for quite some time. He has explained that he cannot divorce his wife until her grandmother dies, otherwise his wife will not get her inheritance and their son will not be able to attend private schools. The usually levelheaded Lizzie has been gaga about the guy since they met 14 years prior, and one wonders why she has put up with his nonsense.

Fred Bennet’s quadruple cardiac bypass brings the two older girls back to Cincinnati for an extended stay. Here, the two elder Bennet girls meet Mr. Bingley and Mr. Darcy. Except in this version they are Dr. Chip Bingley, ER physician, and Dr. Fitzwilliam Darcy, neurosurgeon. Chip Bingley has appeared on the TV reality series, “Eligible,” and is universally known for dissolving into tears when he had to pick between two women on his last episode. He is very handsome and well-bred man, but has not really found his way in life and waffles about practicing medicine. He has a difficult time making up his mind, period. Darcy on the other hand, is thoroughly confident and sure of every opinion he possesses. New to Cincinnati, Liz overhears him telling Bingley that Cincinnati and the people in it are second rate. Although she harbors the same sentiment to some degree, she takes umbrage.

Liz’s friend Charlotte Lucas is employed by Proctor and Gamble, has a very lucrative career with them, and is about 70 pounds overweight. Although Charlotte hits it off with Liz’s step-cousin Willie, a dot com multimillionaire, after Liz turns down his offer to come to California and live with him, Liz and Charlotte draw closer. This closeness between the two old friends is the linchpin in the machinations that bring these four crazy kids, Jane and Bingley, Liz and Darcy, back together eventually. 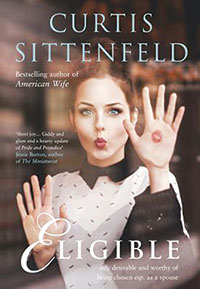 rather than its head. Liz takes it upon herself to help her parents downsize their life. Jane is pregnant and therefore cannot help Liz. Whether the pregnancy is due to her latest iUI attempt or to sleeping with Chip since their first date is uncertain. Although she usually took a pregnancy test after each iUI session, because of her father’s health situation, the rush to get back to Ohio had thrown her off schedule. She goes back to New York to live with some friends, a lesbian couple whose son was born through a donation from a family member. They can relate to Jane on many levels. Mostly, she does not want Fred and Sally to know until she herself knows if it’s Chip’s baby or not. Liz finds an unexpected ally and great helper in kindhearted Hamilton Ryan, Lydia’s boyfriend and the owner of the CrossFit gym where she and Kitty spend most of their waking hours. With his help, they get the Bennet family home decluttered and ready for sale.

The climax of the novel occurs at the filming of a special edition of “Eligible,” where Jane, the pregnant angelic bride, and Chip are to be married. The entire Bennet family is there of course, as well as Dr. Darcy who is best man, and Chip’s sister Caroline who acts as his business manager for “Eligible.” Everyone is attached to microphones so small that sometimes they forget they are there, so you can imagine what ensues between the bickering Bennets.

I put aside my veneration for Austen and enjoyed the humor in this latest Sittenfeld work. She gives many little nods to Austen throughout, using some of her vocabulary – “displeased, odious, make a spectacle of yourself,” etc. This seriously pleased me. She keeps the pace of the story moving along quickly, and we learn more about the characters with each page. I especially found her background story for Jasper Wick hilarious. Sittenfeld also gives Mary, the neglected middle child of the Austen classic, a small chapter at the end of the book explaining her behavior and lifestyle choices.

“Eligible” was quite entertaining as a modern story. When we first meet these characters, they are all jaded, especially the younger Bennet sisters. Jane and Liz are on the verge of middle age and have been through several relationships each, yet their character judgment seems to be nonexistent. In its place, they use sexual aggression with Jane sleeping with Dr. Bingley on their first date and Liz proposing “hate sex” to Dr. Darcy which he accepts. There is also a transgender spouse, interracial dating, as I mentioned earlier the iUI, profanity, history of sexual activity as a sport, the uninvolved parents, adult children refusing to leave home, college educated with nonmarketable degrees, shopaholic Sally, CrossFit and Paleo eating style with which the two younger girls are obsessed. Every meal with the Kitty and Lydia is filled with information about dangerous carbs.

This is definitely a satisfying story. Honestly, it took me a few chapters to get used to the potty mouthed Bennet girls but the raw language lessens as the story goes on – I think Sittenfeld was just making a point in the beginning that hers was not Austen’s story. The only likable characters I found were the realtor and the gym owner. But all the characters change and develop, some of them surprise the reader. Don’t let the 500+ pages scare you – it is a quick read. Sittenfeld is a very skillful writer.

Please note that the publication date is currently scheduled for 4/19/2016. The book can be pre-ordered at the major vendors and our public library is currently taking requests for both the audio and hardcover editions. An advanced copy of this book was obtained from the publisher through NetGalley for this review. Rating: 3.5/5.0.