Election Day and the Markets 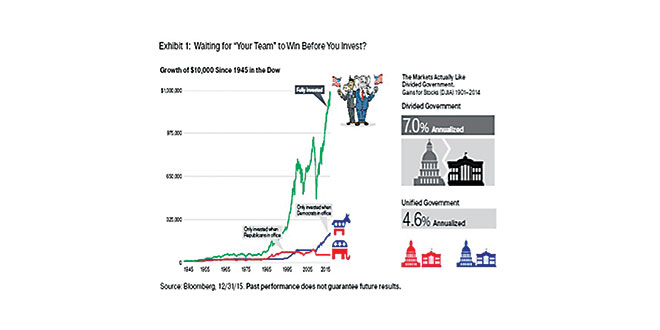 The only limit to our realization of tomorrow will be our doubts of today. –Franklin D. Roosevelt

Question: Does the stock market do better when there is a Democrat or a Republican in office as President?

Answer: It’s a common misconception that financial markets do better when Republicans, or the Grand Old Party (GOP), occupies the White House. This is because they’re known for being “pro-business.” In contrast, Democrats are believed to support higher taxes and increased regulation, which tends to slow down economic and market growth. Therefore, the implication is that markets don’t do as well when Dems occupy the White House. This is not the case in the short-term, yet evidence from Bloomberg and The U.S. Bureau of Economic Analysis states that over any given rolling ten-year period it doesn’t make any difference who’s in the White House and that markets don’t favor either party in the long-run.

There are at least two reasons for this; first, when sworn into office, either party inherits leftover economic challenges to deal with, and secondly, it takes time for new economic policies to take hold. Typically, there is a lag factor until strategy changes materialize showing their full impact on the economy. This interval often distorts party determinations. For instance, the GOP felt they were the recipients of an easy-credit
Democrat driven housing bubble, which led to the Crash of 2007-08. Meanwhile, the Dems say that inheriting the Crash of 2007-08 limited their impact on the economy. Republicans argued that the only way the market could go was up after the 2008 Recession. Historically, it is difficult to argue that either party has a more favorable market impact.

We the People Actually, it’s consumers and businesses that have the greatest impact on the economy. Private consumption, foreign trade and private investment represent 82.4 percent of our economic output. Federal, state and local government makes up the remaining 17.6 percent. Based on these facts, provided by the University of Virginia’s Center for Politics on June 4, 2015, it’s the economy that influences who is president, not the other way around.

The Misery Index, which measures the unemployment rate plus inflation, is a reliable indicator of who’ll win the White House. A strong economy equates to a low Misery Index, indicating a win for the incumbent party, while a high Misery Index or weak economy, likely leads to a change in the Oval Office. If the months leading up to the election are miserable, it’s likely that the opposition to the incumbent wins the keys to the White House. The only two exceptions to this were the 1976 and 1992 elections.

Areas that could be affected by elections include the make-up of the Supreme Court and healthcare. Due to the recent passing of Supreme Court Justice Scalia, there is a Supreme Court justice vacancy to be filled. In addition, three other justices are either eighty or turning eighty over the next three years. This means that potentially four positions could be filled by our next president. Whoever appoints their replacements will shape court decisions and policy for years to come.

If a Republican wins the White House we’re likely to see changes to, but not necessarily a repeal of, Obamacare. On the other side of the aisle, Hillary Clinton supports Obamacare. The President’s regulatory powers also have considerable influence over other areas of the economy such as energy policies, education, financial services and environmental protection policies.

Uncertainty and controversy encompass every election cycle. Unfortunately, election years tend to focus on what’s wrong with our country rather than what’s right. We know markets abhor uncertainty and negativity, so be prepared for volatility. No matter what the results are when we wake up on November 9, 2016, be prepared to celebrate or weep, but don’t abandon a well thought out investment plan.

Keeping the focus on where economic value is being created is the preferred course of action. Don’t let electoral disappointment turn into irrational action. As of this writing, it’s not even clear who the party candidates will be. Anything can happen between now and Election Day, making it increasingly important to concentrate on your vision for the future. Stay focused and plan accordingly.

The opinions expressed are those of the writer, but not necessarily those of Raymond James & Associates, and are subject to change at any time. Information contained in this report was received from sources believed to be reliable, but accuracy is not guaranteed.