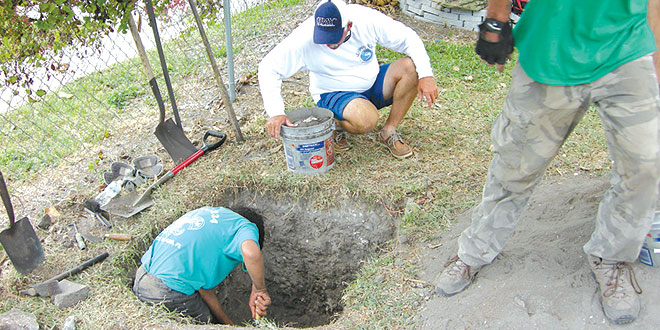 Marco Island Eagle Scout Andrew Smith likes history. In fact, one of the 16-year-old Lely High School student’s hobbies is collecting Civil War artifacts. It was this love of history that led him to archeology and Marco’s resident archeologist, Gene Erjavec, who has spent the last decade digging up artifacts all around Marco Island.

“Throughout middle school, I always wanted to have a career path either as a historian or a museum curator,” says Smith, “until I met Gene and realized there were more hands on jobs that deal with artifacts and the history of past cultures. This is what truly interests me.”

So, last month, Smith asked Erjavec to set up an archeological dig for his Boy Scout Troop with the mission of earning their archeology badges. As luck would have it, Erjavec had been planning a dig at 1163 Bald Eagle Drive in Olde Marco, which is the location of the old Ralph Doxsee homestead. Doxsee was born on Marco Island in 1912, and he died on the island at the ripe old age of 94.

Doxsee’s home no longer sits on the site, and Erjavec says he has wanted to dig there for some time. On a recent Saturday in April, Erjavec, Smith and a few members of Smith’s Boy Scout Troop began excavating the old Doxsee homestead.

“Little do people know that there is always archeology work going on (on Marco),” Erjavec explains. “So, we went for it. I supplied all of the tools, and I will work with Andrew to write up the report and document the dig.”

According to Smith, his interest in archeology started when he was in the fourth grade: “The Marco Island Historical Society was holding a dig at the present-day Otter Mound Preserve in order to document any artifacts which would be inside of holes that plants would be placed in. My parents found out that people could volunteer for this dig and allowed me to miss part of my school day for me to experience this opportunity.”

Years later, Smith ran into Erjavec while he and Joe Mankowski, president of Advanced Archeology Inc. in Fort Lauderdale, were working 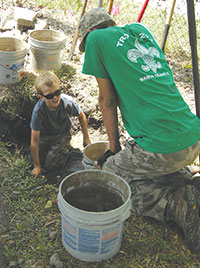 on a dig. “Gene invited me to help out for the day, and allowed me to volunteer with him on three separate digs for the sewer project inside of the estates for the entire summer,” Smith remembers. “Both Gene and Joe gave me the opportunity to work in a field that I would now like to get a degree in. Since then, I volunteered with Gene on almost every dig in the Estates, and I have logged in over 160 volunteer hours.”

During the recent badge dig on the Doxsee property, Erjavec says archaic elements were exposed that predated even the Calusa Indians. “These elements maybe 3,000 years old,” notes Erjavec. “At the end of the day, we found a couple of stone plummets made of local lime stone. They could have been used as jewelry and weights.”

To be sure, Erjavec was not surprised to find these artifacts as “Marco Island has been a village of fishermen for thousands of years.” As this was an official dig, the artifacts already have been transferred to the Marco Island Historical Museum to categorized and documented for the report.

“The kids worked really hard,” notes Erjavec. “They worked from 8 AM-4 PM straight with no time for a break, and they stayed a bit later because we found the really exciting things at the end. Among those working along side Erjavec, Smith and his Boy Scout Troop was another young local boy named Andrew Myer. The two Andrews quickly became Erjavec’s favorite volunteers.

“They were having this amazing conversation,” he says.

While Smith is pleased about the archeology badge, he realizes the big picture impact that digs like he participates in have on the community at large. “(The dig in Olde Marco) helped show more interesting connections between the common artifacts that I have experience with in the Estates to the artifacts in Old Marco,” he explains. “This dig experience helped not only teach me a little more about the Calusa Indians, but helped me test my understanding of it by teaching my troop about the Calusas and the importance of material evidence to understand cultures.”