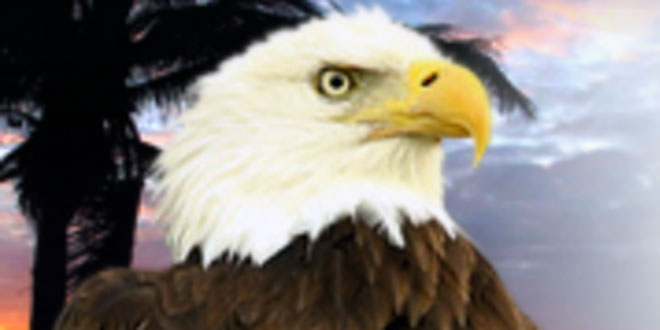 On Monday, Sept. 8, the Marco Island City Council will be asked to sign a letter of support for the Marco Eagle Sanctuary Foundation. This will be the second time in three weeks that Carl Way, chairman and founder of the volunteer, nonprofit foundation, will appear before council seeking its written support for the Marco Eagle Sanctuary at 665 Tigertail Court, which also is known as Tract K.

When Way first appeared before City Council during its regular Aug. 18 meeting, he explained that he was asking for the letter of support as part of the foundation’s current negotiations with the District School Board of Collier County for the continued use of the land as an eagle sanctuary. Deemed a school site by the Mackle brother’s original master plan for Marco Island and thus deeded to the Collier County school system, the school board granted the foundation a $30,000 per year, five-year lease on the property in 2010, after a mating pair of bald eagles was found to have nested on the property three years earlier. The lease provides the sanctuary with an option to purchase the land.

“We are providing an opportunity here for a little more revenue for the island,” Way told councilors. “We are not just a stand alone group in the corner over there looking to make trouble on the island. We are asking council to understand we have value. We need to know that our city appreciates the wildlife as much as we do.”

Way said the foundation had collected more then 2200 signatures from registered Marco Island voters and property owners who support the sanctuary. He also noted that the sanctuary attracts 2,200-2,500 visitors annually. “People from all over the world come to visit it,” he added. “We get 30 calls a week during season asking when the park is open. People are aware of it.”

Further, Way and the foundation have spent the last few years securing all of the federal permits and protections and to register the nest with the U.S. government. As such, as long as bald eagles are on the property, federal guidelines dictate that there is nothing that can happen on that property — that is until the eagle nest is dormant for six years plus one day.

However, Way’s initial request was received with mixed reviews by councilors. While Council Chairman Ken Honecker, Vice Chair Larry Sacher and Councilor Bob Brown were ready to approve the letter and council support, Councilor Larry Honig said not so fast.

“My issue is with the format and the way government works,” explained Honig during the meeting. “I strongly object to something as meaty as this letter unless the community has the opportunity to comment on it first. It was sneaked into this agenda.

“I always want to do things by the book, and this isn’t by the book. There is no one from the community here to discuss council granting something in perpetuity…We are acting as if the wheels of inevitably are rolling, and they don’t need to. The public hasn’t been invited to discuss this.”

“This is simply a request,” Honecker retorted. “I anticipated a vote that we would support it or not, but I didn’t see that it is over and done, and we can’t talk about it. There would be a second crack at the apple for the public to come to bite on.”

Upon confirmation from City Attorney Burt Saunders that no special readings would be necessary because the council was dealing with a letter and not a resolution and further that nothing in the letter creates any legal problems for the city, councilors approved putting the letter on the consent agenda for their Sept. 8 meeting.

Councilor Honig still was not satisfied. “This is not transparent. This has zero to do with support. This is about transparency,” he said.

Even so, City Council will take up the discussion and vote again on Monday, and this time, there may be voices of opposition in the audience, as the letter and City Council discussion has opened up old wounds for some Marco Island residents.

Take Frank Recker, the former Marco Island city councilor who spoke up against the original lease deal for the property between the sanctuary and the school board because, he insisted, the history of Tract K dictates that the Mackle brothers intended for it to be a school site. “I have a strong belief and sense of allegiance to everything educational. From the time I was on council when this first came up, I found it personally offensive,” Recker said in an interview after the Aug. 18 meeting.

In fact, Recker voiced his opposition to the lease deal again and in writing in a recent open letter addressed to the City Council. While the letter was briefly discussed during the Aug. 18 meeting, it also was dismissed by some councilors as a lone voice of dissent on the issue.

Still, another long-time Marco resident and realtor Jim Prange shares Recker’s distaste not for the sanctuary itself but for the politics behind the original charge to set Tract K aside for park land and then the subsequent lease deal between the Marco Eagle Sanctuary Foundation and school board.

“Before anything was built by the Mackles, they laid out everything — every house, schools, churches, commercial and business districts. Marco Island was meant to be a middle-class community, and it had three schools sites,” said Prange.

Of those three sites, only one ended up with a school on it: Tommie Barfield Elementary School. The third site, located behind Marco Walk on South Collier Boulevard, is a condo complex called Club Marco. “Where was the school board? Where was the civic association? Where were they when they gave away that school site?” asked Prange.

Both men are concerned about the future of Marco Island’s school aged children. “Where are our kids going to go to school? Our high school students go to seven different high schools spread throughout Collier County right now…Somebody has got to stand up. I don’t care if we have to wait 10 years to get that site back… This is not a retirement community. There are families here. We are going to have a hard time attracting people here if our kids have to get up at 5 AM to catch a bus to go to school into Naples.”

Recker agreed: “Everyone is happy (about the sanctuary) except those who consider the future education needs of Marco Island…Who stands up for the kids? No one…There is no one here to speak for the high school children.”