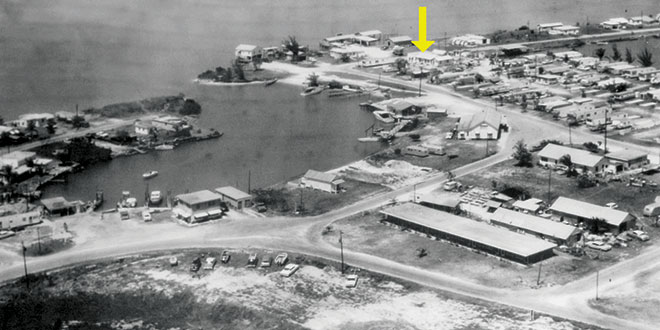 Drop Anchor is a collection of sixty-three gaily painted and well maintained 1950s, 60s and 70s travel trailers, and single wide manufactured homes crammed onto less than two acres of land in the heart of Goodland. Today it is a quiet, well-run, close-knit community, revered by its residents and neighbors. Goodland kind of grew up around it.

The first residents were winter visitors, lured here by word of mouth, warm weather, fabulous fishing (always the fishing), and Woodall’s Campground Directory. Always known as Drop Anchor, the park was developed as a trailer park, and was originally owned by Doris and Francis Gidley and Tom and Anne Ennis. By the late 50s there were three winter residents with trailers at the park – Stith Noe, Joe Pettus and Jack Roush. They have all departed for wherever fishermen go. They have left behind children who still live here, still faithfully returning to Goodland each winter. Jack Roush’s daughter, Peggy Ritschard, was so enchanted by Goodland that she moved to Drop Anchor (for winter seasons) with her husband and young family in the early 60s. She still resides in a small home at the southern edge of the park. Peggy just celebrated her 81st birthday. She is a vibrant active woman, and seems to have total recall of how things were. She is perky and delightful to talk to

When first visiting her dad, Jack Roush, in the late 50’s, Peggy found a small trailer park, which 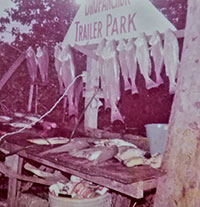 Drop Anchor fish cleaning station, located in the vacant northeast section of the park, circa 1971.

took up less than an acre. It had only three travel trailers in residence. Then, as now, it was bounded by Bayshore Way on the north, but extended only about 200 feet south of the main entrance. Beginning in about 1961, Peggy and Donald Ritschard rented a two-bedroom apartment (about where the main entrance is now). It was part of a three-apartment complex and sat partially on top of the park cistern, which provided drinking water to the residents. The park did provide water hookups, but “the water was sulphurous and vile tasting,” Peggy said. “It was only good for showering or washing.” To get half decent drinking water, the residents depended on the cistern. It protruded a couple of feet from ground level with shells banked up around it. During the dry season, “The cistern was filled twice a week by a guy from up the road (Goodland, Inc., run by Ted Cursie, handled water deliveries),” Peggy recalls, “The park residents would come out with their pots to fill with drinking water. An electric pump would deliver the water through a spigot.” During the rainy season, down spouts from Peggy’s apartment complex fed runoff into the cistern. When the county started spraying for mosquitoes, the cistern was shut down to avoid contamination from residue from the roof. “That turned out alright as Marco started sending water down from their water works at about this time.”

In the early 60s, “There was no place to shop 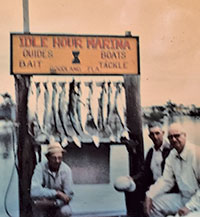 on Marco Island,” Peggy said, “In Goodland, Pete and Doris (last names unrecalled) ran a small grocery store with a small bar at one end, known as the Little Bar. The store was more like a convenience store and very expensive,” Peggy said, “We drove over to Naples twice a week to do our shopping and wash our clothes. To get to the grocery store and Hartley’s Variety Store we had to go just north of Naples. The laundromat, on Davis Boulevard, is still there. Naples didn’t come out as far as Davis Boulevard.” She recalls that between Naples and the Goodland swing bridge there was nothing. It was a long dreary trip.

There was a restaurant in Goodland however. Herb and Bessie Robinson owned a one-story restaurant, (the Idle Hour) which later became Stan’s. There was a bait house and small marina out back. Peggy’s mom was a cook at the restaurant and her dad sold bait and rented boats there. The food was mainly burgers, fries and such. It was good and the Ritschards ate there often. About 1963, another restaurant was added when the Old Marco Lodge was moved over from Old Marco. It was a big deal and caused a sensation in Goodland. “All the power lines had to be removed and crowds lined the road to watch,” said Peggy, “We were able to see the whole thing from our apartment.”

Peggy Ritschard at the end of the Coconut Avenue Canal, East Palm Avenue in background, 1961

beach. There was one other family in the park with young kids. “We would load up the kids and a picnic lunch and drive right onto the beach,” Peggy said, “There was nothing to see on the way except for mangroves and scrub land. San Marco Road ended at the beach’s edge. We just drove off the road and straight onto the beach. It was a good life and the kids loved it. The only building visible along the coast was a small missile base at the south end. We could drive up and down the length of the beach as long as we stayed ln the wet sand.” It is hard but intriguing to imagine today, travelling San Marco Road with no cross streets and no Collier Boulevard at the end. With the fishing, beaches, outdoor living, and friendly neighbors, it must have been an idyllic life. Sound familiar?

Most of the park residents, including many of the wives, spent their days out on the water, pulling in prodigious amounts of very big fish. A lot of photos of these whoppers were taken as proof of their prowess. Fishing was the main driver of Goodland development in those days.

In the mid 1960s, a new owner, Allen Greer, took over the park (Greer would own and run the park until 1990). He started making changes right away. He intended to make trailer lots out of the whole park and told Peggy that this would involve tearing 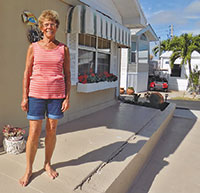 Peggy Ritschard at rear of home, Drop Anchor to the right. PHOTO BY BARRY GWINN

down her apartment and converting it to trailer lots. “I suspected that Greer did not want to pay for filling the cistern, once the mosquito spray started tainting the rain water,” said Peggy. Greer also wanted only age 55 and older residents in the park and proposed increasing the rentals. Up to this time there was no formal organization. The tenants just paid rent to the owners. “After Greer took over, it was Greer’s way or the highway,” said current board president, Dennis Grill, “Greer ran the park as his personal fiefdom. There was no appeal from his decisions.” Greer told the Ritschards that since their children were so well behaved, he would allow them to get a trailer and live on one of the new lots. “We didn’t feel that was right and perhaps unfair to the older owners,” said Peggy. Instead, in 1968 the Ritschards bought a model home on Lilac Court on Marco Island. They lived there for the next five years.

Like the rest of us, the Ritschards discovered that once you have lived here, it is very, very hard to stay away. They moved back to Goodland in 1974. The Ritschards ended up buying a three-unit motel across from the post office. It wasn’t in Drop Anchor, but right next door. They had finally prevailed on their good friends, Rex and Ruby Johnson, to sell it to them. The Johnsons also owned the Margood Trailer Park. Cal Hardin and Richard Welsh

remodeled the small motel to its present attractive configuration. The property had a cistern, which was filled by the same guy who serviced Drop Anchor. He used to complain that the Ritschards were using more water than the entire rest of the park. “I told him that this was because we had a clothes washer,” Peggy said, “but this didn’t seem to get his sympathy.”

Donald Ritschard died of prostate cancer in 2009. He and Peggy had been married for 53 years, living in South Bend, Indiana. They have a beautiful lakeside home there, where Peggy spends the off-season. Peggy has faithfully continued to come to Goodland each winter. They have four children. Two daughters live in Naples. A son and daughter live in South Bend, having taken over the demolitions business from their father. Almost all of Peggy’s friends who were here at the beginning are gone now. Peggy has made a lot of new friends and everyone I talked to at Drop Anchor is fond of her and holds her in high regard. The Ritschard family business was very successful. They could have built anywhere on Marco Island or Naples. Peggy’s annual return to the Goodland cottage each winter serves as a testament to our way of life.

One response to “Drop Anchor Trailer Park – The Early Years”