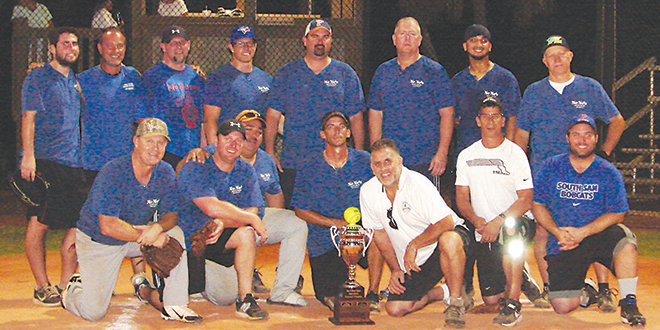 The champs are Island Plaza.

For the second year in a row the Island Pizza/NeNe Kitchen team won the season ending tournament. Island Pizza along with its regular season crown “Doubled up” as champions of the City’s adult softball league for the second year in a row. On a beautiful night you could feel the electricity in the air as Island Pizza prepared to defend its crown against their arch rivals Joey’s Pizza at Winterberry field. In what would turn out to be a seesaw game the game had it all, hits, great defensive plays, home runs and errors. Island Pizza was led by Brad Frazier’s 4 hits including a HR, Butch Smith’s 3 hits, Pat McGuire’s 2 hits including a HR and Bobby Natale, Jr. Home run. Joey’s was led by Vince Gentile’s grand slam, Steve Pahr’s 4 hits, Zach Luetkemeyer’ s and Riley McGregor’s 3 hits. This concluded the 2014-15 Adult softball season, look for the City’s Co-Ed league to start up April 16th. If you are interested in entering a team in the Co-Ed league contact Alex Galiana at Mackle Park, 389-5196.