Don’t Use Your Foot as Bait! 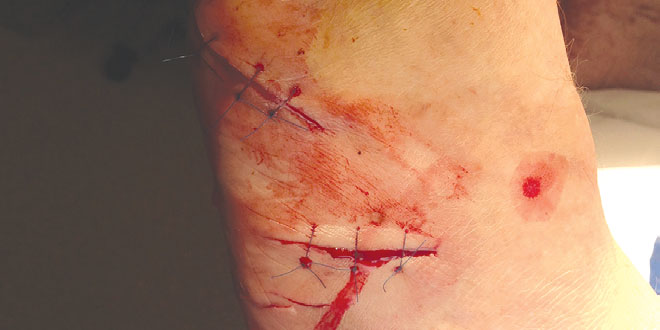 A young islander recently saved the day for Ross Snyder. Ross, an experienced fisherman with thousands of hours on the water under his belt, tells of fishing with well-known names like Doyle Doxsee and Tom McPherson when he was a young boy. The number of hours he has racked up fishing is a tale verified by his GPS trackers.

Ross, in true “salty dog” form, was passing on the fishing tradition by taking young Marco Islander, JohnEdward Padgett-Wright, out on the water to one of his favorite fishing spots. JohnEdward, a MICMS student and son of Victoria Wright and Simon Padgett, loves being on the water. He was honored to fish with a true Marco Island original. The two took off in Ross’s 24’ Carolina Skiff to fish for Permit at one of Ross’s favorite spots. Soon, they realized the location they were looking for was about 200 feet to the left of where they stopped according to GPS. They moved slightly to the correct coordinates and had been out only about half an hour when disaster struck.

The two had just put their lines in the water. Ross sat on the edge of the skiff to relax and being a hot afternoon, put his foot in the water to cool off. He was telling JohnEdward a story. No sooner had the foot touched the water when something hit it. It bit down, pulled and shook slightly. Somehow, Ross pulled his foot from the fish’s mouth. JohnEdward saw a large barracuda swim away.

Ross brought his foot into the boat spurting blood. “I knew it was bad when I pulled my foot in, and JohnEdward’s eyes were about to pop out of his head,” said Ross. JohnEdward, calmly went into “emergency mood” and pulled off his shirt to wrap up the foot. “Ross was feeling woozy. I had to get his foot wrapped up and everything back in the boat.”

Luckily for Ross, JohnEdward actually has a boating license from the state of Florida — something he achieved more than a year ago and 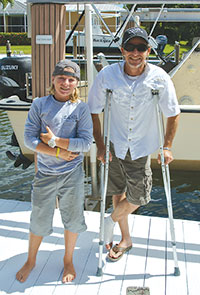 has since logged dozens of hours behind the wheel. As JohnEdward was preparing to race back to shore, a blue boat pulled up with twin 200 HP engines. “They asked if we needed help and I said, ‘Yeah.’ Someone from the blue boat threw a first aid kit. There was no way I was unwrapping that foot when it was bleeding like that to put on a band-aid!” said JohnEdward. “I just took off to get back. I could barely see the green tops of some condos on the island, and that’s where I headed. We went back at full throttle!”

According to Ross, he was thankful JohnEdward knew what he was doing! “I was falling in and out of consciousness. At one point I guess I tried to stand up because he yelled at me to SIT DOWN! I kept asking the same questions over and over again, mostly wondering about my fishing gear. Steering the boat had to be hard because I was in the captain’s seat and JohnEdward was steering over me. “

JohnEdward found his way back to Caxambas Marina. “We got him off the boat, and you could see his path since he left this trail of blood. The boat was covered in blood,” said JohnEdward. Ross wouldn’t allow the marina personnel to call for emergency help as his wife was on her way. JohnEdward called her on the way in. She pulled in, and Ross was helped out to the car and rushed to Physicians Regional Hospital. “Nine wounds, fourteen stitches later, they wrapped my foot, and now I am on crutches until it heals. If I had been out there alone, I certainly would not have made it back. I would have passed out, and that would have been all there was. Something like this really teaches you a lesson. Never use your foot for shark bait!”

Once Ross was safe, JohnEdward drove the boat back to Ross’s dock. Victoria and Simon are extremely proud of their son saying, “He remained calm, and did what had to be done. He is our hero.”