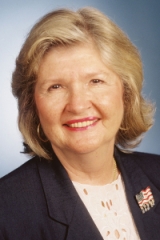 Congratulations to Dr. Fay Biles on winning a Jefferson Award for her outstanding volunteerism! We are so pleased that one of our own Marco Island residents was so honored. If you remember, last year we  had another winner: Shirlee Barcic. It looks as if Marco Island is getting some great recognition.

Many people have been asking about the median landscaping on 951/Collier Blvd., north of the Jolley Bridge to Hammock Bay. The section that has recently been completed looks so lovely, and once it has had some growing time will look outstanding. The reason for the holdup on the next section of landscaping near Isles of Capri is that the State required, at the 11th hour, that the county Parks and Recreation Department (the department building the greatly expanded boat launch parking area from 19 spaces to 86 spaces), install an additional four-foot shoulder lane and a two-foot bike lane along the boat ramp boundaries, in addition to the excel/decel lanes already installed. There isn’t another shoulder area or bike lane along the entire roadway except for this area. Within the next six months, a turn arrow will be installed at the entrance to the boat ramp park, once the particulars can be decided. The boat ramp park itself will be finished by the end of January. Meanwhile, the next phase of landscaping can begin as soon as we get permission from the State to proceed. The median landscaping will be installed to within 1,000 feet from the Jolley Bridge construction area, and is expected to be completed by early April.

Speaking of the Jolley Bridge, many people want to know where the new bridge will be built.  It will be a separate bridge entirely, and will be built on the Marco Island Yacht Club side of the present bridge.  One of the first changes you will see as construction begins in April, will be two new northbound travel lanes built to the existing bridge.  Two-way travel will be shifted temporarily to these lanes, one in each direction. Throughout construction one northbound and one south-bound lane will be open to traffic. The project is expected to be finished by the end of 2011.

At a recent community gathering, I heard only one concern: the sides of the new bridge will be six inches higher that our present bridge and solid, making it almost impossible to see Marco as you travel southbound onto Marco Island, which most consider one of the beautiful sights to behold. I don’t know if that can be changed, but I DO know that the State has heard the concern. Possibly we can discuss this issue at the next MPO (Metropolitan Planning Organization) meeting, attended by State officials, County Commissioners and Marco City Councilors, plus the Cities of Naples and Everglades City.

What a gem Marco has in the Coast Guard Auxiliary Flotilla 95!  These dedicated individuals offer classes on boating safety at Caxambas Park, they are called upon for rescue missions, they work closely with Homeland Security and the Marco Police Department, and are ready to help whenever called upon. They recently installed their new officers, and are ready for another outstanding year.  Why not drop by and check out their schedule of courses or call Doug Johnson, their officer in charge of Public Education at 642-8406.

The Marco Island Kiwanis Club will be presenting their annual Marco Island Car Show on February 14th from 10 a.m. to 3 p.m. at the Healthcare Center on San Marco Road and Heathwood Drive.  There is no fee to enter a car to display, but there will be a general admission fee of $5.00.  Food and beverages will be available for purchase.  Steve Reynolds will be the guest M.C.  A $6 table of jewelry and accessories will also be available for purchase.  For more information please call 393-0575 or 272-0816.

The Marco Island Kiwanis Club, one of the premier clubs throughout the state of Florida, meets every Thursday at 7:30 a.m. at Porky’s Restaurant.  Everyone is invited to attend these meetings and become a part of this exciting organization.