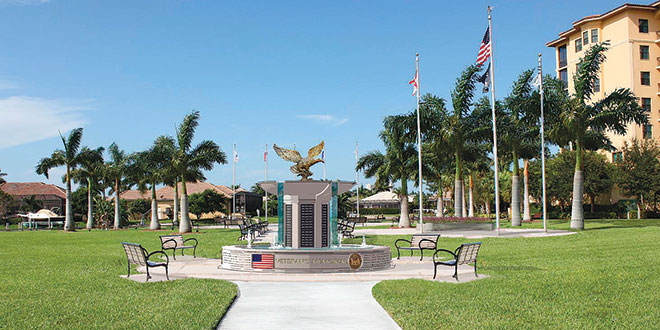 Rendering of the Freedom Fountain and Flag Plaza. SUBMITTED PHOTO

A decade ago, Marco Islanders envisioned a new city park when they approved the $10 million bond referendum to purchase the old Glon property. This park would include a memorial to Marco Island’s veterans, and would be called Veterans’ Memorial Park.

Part of the plan included a memorial flag plaza with benches and lush landscaping. It would be the perfect gathering spot for veterans’ celebrations or moments of silence to honor fallen heroes. It also included a water feature known as the Freedom Fountain, the piece de resistance of the memorial. In 2007, the Veterans’ Memorial Fundraising Committee was created to help make this plan a reality.

Now, seven years and $455,000 in community donations later, the veterans’ memorial soon will be complete thanks to a very generous $81,000 donation from Bob and Thelma Sargent. The donation gives the committee the final funds necessary to begin work on the Freedom Fountain. All told, the Sargents have donated more than $100,000 to Veterans’ Memorial Park.

Lee Rubenstein, chairman of the fundraising committee, made the announcement July 30 during an impromptu meeting of the committee held at Iberia Bank. In addition to the committee members, City Manager Roger Hernstadt and City Councilor Joe Batte were in attendance.

“This is really big for our veterans,” Batte said. “It’s also big for the people because the people really paid a lot of money for this property and (now) have something which really demonstrates a place to honor veterans and moving toward the completion of that.”

The Freedom Fountain will sit at the memorial’s entrance, joining the flag plaza where the American, Marco Island, state of Florida and POW/MIA flags proudly wave above the inscribed brick-paver plaza. The plaza is accented by a planter bench in the center and memorial benches and trees along the perimeter with the Veteran’s Memorial Circle in the background.

The approximately $200,000 fountain will stand 10-feet tall and have a 26-foot circumference. Topping it will be the 9-foot tall bronze, in-flight American eagle, which is temporarily perched outside the city of Marco Island’s Community Room, located at 51 Bald Eagle Drive, behind City Hall. An artist’s rendering of the Freedom Fountain is on permanent display at both City Hall and Mackle Park.

During the announcement, Rubenstein praised the community for its generosity and also thanked the City of Marco Island for its support for the project. He also expressed gratitude for the assistance of Marco’s VFW Post 6370 and the contributions of large donors like Jim and Allyson Richards of Marco, whose gift was the first large donation toward the Freedom Fountain, and the Sargents. Full funding for the bronze American eagle was donated by Marco residents Mike and Jill Havey.

The Sargents were able to make the donation thanks to a stock buying program through the Community Foundation of Collier County, which works with families, individuals, attorneys, and estate and financial planners to create philanthropic gift plans. Because the Veterans’ Memorial Fundraising Committee set up a fund through the foundation, the Sargents were able to transfer their stock to the foundation which then sold it immediately, while securing a tax deduction for the Sargents.

“The donor gets a better tax deduction,” explained Eileen Connolly-Keesler, the foundation’s president and CEO. “It’s a win-win to be able to use that for a charitable gift.”

Currently, Rubenstein plans to hold a dedication for the Freedom Fountain on Dec. 7. Fountain contractor Crystal Waterscapes informed him it would take at least 90 days to complete the fountain, so achieving the Dec. 7 goal hinges on the contractor’s availability, possible supplier delays, receipt of necessary governmental permits and any other unforeseen issues.

Iberia Bank Manager Keith Dameron applauded the fundraising committee for its efforts: “You have brought Veterans’ Park to life thanks to the generosity of this community. What you do and what this community does is inspirational.”

The Fundraising Committee and the city are continuing to secure funds for future enhancements to the memorial and park. Commemorative brick pavers still can be purchased, as well as commemorative inscriptions on the fountain’s granite panels. Tax deductible donations also are being accepted. Donation forms and information on purchasing brick pavers and fountain inscriptions are available at Mackle Park or by calling Patty Mastronardi of the city’s Parks and Recreation Department at 239-389-5035 or Rubenstein at 239-564-9894.

For online information to donate to the fountain or purchase pavers visit: www.cityofmarcoisland.com/index.aspx?page=367.