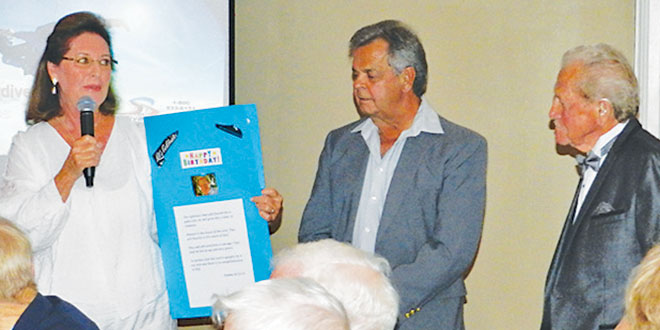 Imagine being three miles above the Earth’s surface. Up above the open fields and up above the billowy clouds. The plane’s door is open and it’s your turn to jump. Would you??? Well, Donald did just that. Donald Mills, sky dived for the first time in his life and he did it in order to celebrate his 90th…that’s right, his 90th birthday!!!

Holding on tight in the open doorway of a small prop plane at 14,000 feet, he’d held firm so that the wind would not suck him out. A sudden nudge came from the man he was harnessed in tandem with and they jumped. Out and away from the plane they dropped; immediately becoming airborne projectiles. Face skin flapping in the intense wind, they careened through the 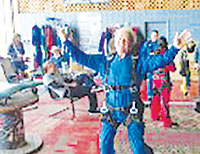 air at one hundred and twenty miles per hour. Arms fully stretched and looking a lot like two swooping birds. They commenced into a hair raising free fall which lasted an eternal sixty seconds. Finally, the ring was pulled, the chute was opened and with one violent jerk, they slowed to twenty miles per hour. A braking force so great, it could bring up a lunch, make you pee in your pants or cause you to lose your hearing-aids. Luckily, none of which happened.

As the ten jumpers slowly descended to earth, it became fearfully obvious that, even at that speed, things can go very wrong. Especially, if one had forgotten one’s parachute string etiquette. One fellow was perilously twirling in mid-air before getting back into control. Another seemed to accelerate 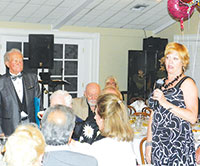 dangerously as he approached the ground, only to slow in the last 50 feet. For him, a remarkably gentle landing. Family members lost sight of Don as he touched down behind one of the airplane hangars. A short ride and he finally came back into view. Approaching his friends and family in the bleachers, he was carrying the biggest possible smile on his wind-blown face, the mark of his goggles still pressed into his skin. In return, he received the biggest round of applause our hands and voices could ever thunder up. Surely, a combination of awe and relief. A 90 year old dynamo, he paints, he plays the sax, sails his own sailboat 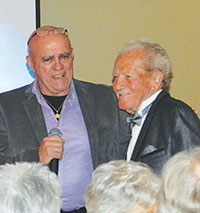 and now, he jumps out of airplanes. What could be next? The space shuttle?

The party that evening was filled with family, friends and roasts from anyone who knew how to tickle his funny bone. When asked for the secret of his longevity, he did not skip a beat. With a sly grin and a bit of swagger, he jocularly replied, “I make it a point to – avoid – moderation”. Of course, the crowd roared with laughter.

Nearing the end of the evening, Don amazingly moved back to the dance floor in order to dust off one of his old tap dance routines. With everyone saying good night, he looked over at his wonderful, vivacious girlfriend Doreen, and asked, “So, what are we doing tomorrow night? Wow!!!! Happy 90th Don!