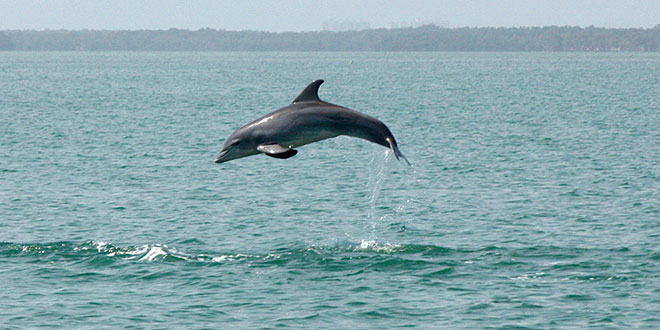 Over here is Halfway, an adult female bottlenose dolphin and mom to at least four calves. Over there is one of our dominant male pair bonds, Hatchet and Capri.”

These are common refrains by naturalist Kent Morse and marine biologist James Liviccari on board the Dolphin Explorer. With 16 years of experience between them studying the bottlenose dolphins in and around Marco Island, these two professionals not only identify the area mammals but they recognize certain behaviors and traits of many individuals. With eight complete years of survey data in their hands, some amazing findings now are being revealed.

First, let’s meet this extraordinary team. Kent Morse is a graduate of Ohio State University and a certified Florida naturalist. He has been with Sea Excursion’s 10,000 Island Dolphin Project on board the Dolphin Explorer since the program began in February 2006. James Liviccari is a marine biologist, and studied at the University of New Orleans and Florida Gulf Coast University. 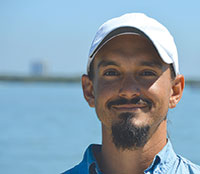 Passionate about their work, James Livaccari and Kent Morse (BELOW) comprise the research team on board the Dolphin Explorer, docked at the Rose Marina.

most days and is an FGCU grad in Environmental Sciences. Captain Bob Erickson also pilots the boat and is a Master Captain and a graduate of Naples High School. The project was founded by Captain Chris Desmond, who now supervises the educational program along with media specialist and FGCU grad Kristen Froelich. I am a Master Naturalist, and I have had the honor of filling in for Kent and James on occasion. Believe me, it is a tough assignment; those two guys are sharp!

Dolphin identification used to be a very stressful process. They would have to be captured and then tagged or branded in order to keep future sightings accurate. Survey teams around the world now realize that each dorsal fin is very unique, and when a dolphin surfaces to breathe, that fin is visible. A good photograph is all that is needed to recognize each one. Kent and James have identified more than 300 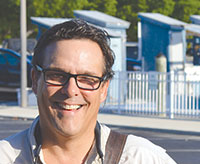 individual dolphins in four separate survey areas in and around Marco Island.

Bottlenosed dolphins are not considered a threatened species because they number in the hundreds of thousands worldwide. However, coastal bottlenosed dolphins — like we have here — are declining around the earth primarily because of manmade problems, such as overfishing, pollution, land development and the introduction of chemicals to their habitat. Several cases in point would be Moray Firth, Scotland; the Doubtful Sound, New Zealand (home to one of the southernmost populations of bottlenose dolphins); and also along the coast of Japan.

Unlike the areas mentioned above, survey area No. 1 of Marco Island — which covers north Marco and the intracoastal waters up to marker 44 behind Keewaydin Island — is sustaining a residential population of around 60 to 70 dolphins. More than 40 newborns have been seen since 2006, 50 in all including moms that already had babies. Thirty-three calves have been entered into the database and 22 of those have made it through their

YOY (young of year) period after their third birthday to become subadults.

That’s a survival rate of 66 percent. Many surveys of similar dolphins around the world are inconclusive or conclude survival rates below 50 percent.

Locally, there still are about 17 YOYs that could boost our ratio if they survive after leaving the mother. So in an average year, four YOYs will survive to subadulthood in Marco’s area No. 1, and only one or two will not make it to breeding age, which is around nine years old. That gives a positive ratio of two or three dolphins every year in area No. 1.

Meet the dolphins of Marco

Remember that all of the dolphins in the Dolphin Explorer’s database have been individually identified. They all also have been named. With that in mind, lets meet some. 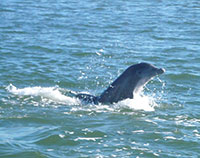 area, and in many cases, have been replaced by new, younger male pair bonds. For example, Spike and Patch were a prominent bond pair in the early survey years. Neither has been spotted for a long time. CU Jimmie, Flag and Sharks have all lost their bonded partner, but they remain in the area by themselves. They have not created a permanent bond with any other adult male dolphin. Partners Hatchet and Capri and partners Capt. Jack and Trixie (yes, Trixie is a male) were already allied in 2006, and now appear to be the top male bonds along with Bangle and Finch who arrived in the area after dolphins such as Spike and Patch were no longer seen.

The adult females are thought to have longer life spans than males and will travel shorter ranges when they have calves. There are fewer females leaving the area than males. Nearly all of the moms from 2006 are not only still around but they are still producing calves. Adult

female Halfway, for example, just had her fourth calf this past fall, and is now mom to Simon, Seymour, Kaya and Skip.

Newer moms to the area include Batman (yes, Batman’s a girl), Button and Rakes. A noticeable change among one mom is Nibbles. She gave birth to Jason and was predominantly seen around the Jolley Bridge and the ABC islands. With new calf Coco, Nibbles is seen on the backside of Keewaydin Island and has not been seen in the bridge area since.

The subadult group is the most difficult to study. These are dolphins ranging in age from 3 to 12, depending upon maturity. Knowing the survival rate is hard because it is not definite if some of these have left the area or if they are deceased. However, they seem to be the most exciting group, and are very social and playful.

New info will continue to reveal just how stable the population will remain. Since adult females give birth every three years or more, it

is known that there are 15 potential new moms for 2014. Also, having identified several YOYs in 2006, it is possible that the team might see their first grandmother this fall, and that can give some insight to intergenerational interactions.

The population here appears to be stable and possibly increasing, but because they socialize in such small neighborhoods, they could be vulnerable to accumulating manmade threats as seen around the world. Fishing line entanglements, pollution, increased boat traffic and even a potential chemical spill could decimate their neighborhoods. Only one thing will reveal this outcome….time.

We look forward to more reports by Kent and James and the entire Dolphin Explorer team. Their research should prove invaluable to a world of readers. Keep up the great work and thank you!