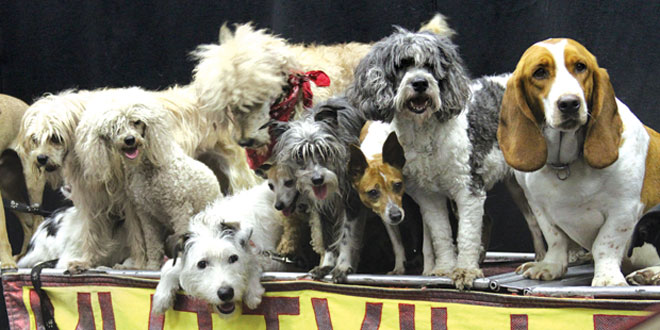 Audiences were completely won over by the shaggy Muttville Comix performers and their trainer, Johnny Peers. Johnny knows his way around an audience, being raised near the circus and graduating from the Ringling Clown School. He began working with dogs in the early 1990’s. There were 16 dogs in the show he brought to Marco. There was Joey the Fox Terrier, who walked backwards on two wires while Chico, a Chihuahua, walked underneath him in the opposite direction. One canine could leap through the air to Johnny’s arms, while others could dance, do a conga line, and one knew mathematics well enough to 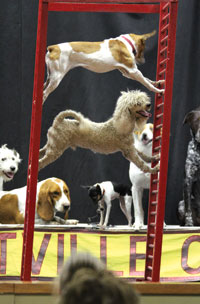 challenge some of the youngsters! A favorite amongst the children in the audience was Noodles, the Basset Hound. Noodles was so anxious to be pet by the children sitting in front of the stage that he had to be told more than once to go back and sit with the other dogs.

The Marco Island Kiwanis Club brought two appearances of Muttville Comix to the island and is already making plans for next year’s shows. Girl Scouts from Troop 389 baked and decorated 800 cupcakes, brownies and muffins to sell during intermission. Left-over treats were neatly packed and brought to St. Matthew’s House, just in time for their evening snack.