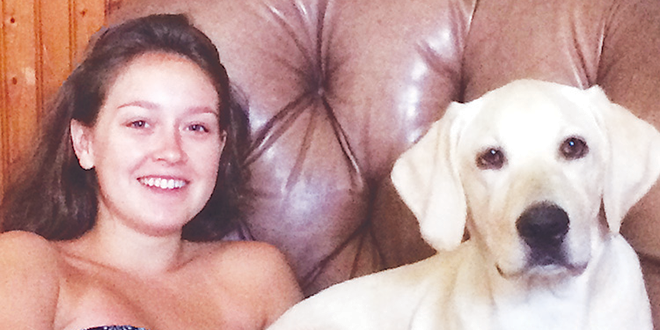 Yes, Breezy is definitely growing into his long legs and lean body. Little razor teeth have been replaced by large teeth and sharp claws are worn down and no longer puncture skin so easily. His overall demeanor is slightly calmer although he still has several bouts of ‘puppy brain’ craziness and pure DOGITUDE on a daily basis! He knows no boundaries as he leaps onto the couch or onto one’s lap. He is certain he is just a furry human. He still ‘air snaps’, he still jumps on people, he STILL doesn’t understand DOWN and has a very nonchalant relationship with the word NO. We’re working on it though. A trainer suggested something called a ‘gentle leader,’ saying it was like ‘power steering’ for dogs. It works great! It’s saved my shoulder from being pulled out of its socket while Breezy pulls me for a walk. He IS strong. It reminds me of being on a fast moving treadmill and no matter how fast my little fat legs move, my feet are coming out from under me. We went through three different kinds of collars and various chains including one with the big inward spikes before we found the ‘gentle leader’. It was a welcome addition to our puppy training arsenal after Breezy pulled me down face first, breaking my shoe on our way to the car one day. Breezy taught me another trick! If you really want to impress your trainer and other dog owners, don’t feed your dog BEFORE training class. Wait on breakfast, keep those extra special treats in your hand at nose level and then show off your dog’s superior intellect with commands such as ‘sit’, ‘stay’ and ‘okay’. Talk about following you around ‘like a puppy dog’. This was GREAT! It works for us at least until we get home when he eats a full bowl of chow. Speaking of eating, Breezy is tall enough now to eat anything he can find right off the kitchen counter. He sniffs along the rim and then waits until you leave the kitchen. We’ve learned if we hear a funny noise that isn’t the refrigerator we need to get in there quick! A huge bowl of spaghetti and meatballs, enough to feed an army, was reduced to just a few noodles at the bottom. So much for left-overs. One morning, my husband was yelling at Breezy as I came into the kitchen for coffee, “He just ate the sausage we were going to have for breakfast! It wasn’t cooked yet!” Oh my! Raw PORK! Bit more serious than several pounds of spaghetti. A quick internet search told me not to panic. This too shall pass and so it did. More disconcerting was when I had thrown out a few pieces of fried chicken. A few minutes later I pulled the trash bin out from the cabinet, Breezy had a sixth sense (and smell) that there was something appealing in there and with pinpoint accuracy, stuck his nose all the way in, grabbed a piece of chicken and took off running, all within a tenth of a second before the bin reached the floor! It took a second for my brain to comprehend, but Breezy took off running so I KNEW he must have something he shouldn’t have. When I cornered him, he had the entire piece of fried chicken dangling from his mouth. As I reached for it and said ‘LEAVE IT’, he quickly swallowed it WHOLE!!! No chewing, no crumbs, it was gone, bones and all. All we could do the next few days was pray that the bones would pass. He is so fast when he wants to be naughty or when he wants you to chase him.

All minor scares compared to the big ‘C’ scare. He had a small bump on his neck which we figured would go away in a day or two. It didn’t. It wasn’t healing and was often raw. The trainer suggested I have it ‘checked out’. We made an appointment with the vet and were told it didn’t look good and required a biopsy. I admit, all I heard was “it’s cancer.” Then I heard depending on what kind, surgery could be minor or more invasive. We set a time for a punch biopsy which required sedation and stitches. Now we had to wait ten days for the results. It was hard to fathom how a dog of six months could have cancer. We were in tears. My stoic husband reminded me a new dog would be less expensive than surgery. (Of course that was unfathomable!) Now, I understood the need for pet insurance. Although we had a trial insurance policy when we got Breezy, it had expired. Fortunately, we had a lot of people praying for Breezy and the results came back benign. No surgery necessary! I want to thank everyone for those prayers-they worked! And in interest of full disclosure, I now have pet insurance. Breezy would like ALL of his PET friends to enter the PICTURE PERFECT PET PHOTO CONTEST! There are prizes to be won thanks to Critter Café and this newspaper! Every pet photo will be printed in Coastal Breeze News and the BEST PART is your entire entry fee of $12 will go to your choice of four local animal related charities. Come on! Send us your best shot of your furry, feathered or scaly member of the family! Breezy hopes to be in the office to greet you personally if you drop off your entry. For anyone who comes by the Coastal Breeze office, we apologize if Breezy jumps or barks. He really isn’t aggressive, he just has a puppy brain he’s learning to control and he’s SO happy to meet you! He has learned to push the door open and follow people right out. He is FAST! Out the door and down the hall in a flash. Believe me, Greyhounds have nothing on Breezy. So you may find a sign that reads, ‘Please Knock’ because we find it is best to lock him in.

Photos by Val and Jessica Simon