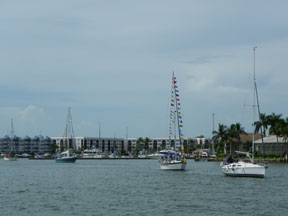 AIR APPARENT, JEANINE, MARIA KAY, and HUMMING BIRD setting off for the 4th of July parade of boats. Photo by Vice Commodore Mary Lee Cale from the deck of RHAPSODY, leading the parade.

The members of the Sailing Association of Marco Island (SAMI) sure do, but in the summer months the heat is strong and the breezes are weak. That doesn’t keep good friends from getting together and enjoying their boats and a little socializing.

On June 21 the monthly meeting was catered by Porky’s at the Isles of Capri Community Center and the evening’s speakers described the delivery of a sailing race boat from Bermuda back to its home port in Massachusetts. The next day was to be the beginning of a cruise to Naples Bay and the City Dock, but there was heavy rain and too much wind. Still a few stalwart sailors navigated their cars up to “The 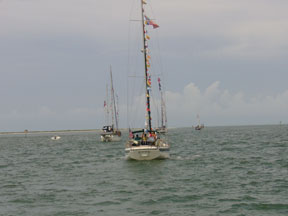 SAMI parade of boats off Sand Dollar Beach. Photo by Lucie Galloup from the deck of MARIA KAY.

Boat House” restaurant and enjoyed dinner as had been planned as part of the weekend cruise. A few weeks ago they ran their engines (no wind) and paraded a number of patriotically decorated boats down past Marco’s beaches for the 4th of July. Later that day all the paraders enjoyed a cookout at the home of Rear Commodore John Weston.

Coming up next will be a cookout at Gene Sarazen Park on Saturday, August 18.

SAMI meets on the third Thursday of each month for socializing and planning of sailing events. SAMI organizes cruises to not-so- distant destinations and also hosts races both formal and less formal. Boat ownership not necessary. For information, call Sandy Dumas at 389-2677 or visit www.samisailor.org.