Did You Get Your Ethanol Quotient Today? 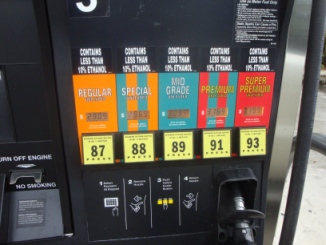 The next time you pump some gas into your car check out the stickers above the price per gallon. The photo shows a typical pump on Marco Island indicating that the gas “contains less than 10% ethanol”. Florida decided to mandate blending ethanol into our gasoline supply so that by the end of this year all gasoline consumed at conventional pumps in Florida will have 10% ethanol. This gasoline is described as E10 and the pump will show an E10 sticker. Ethanol, a bio-fuel, helps oxygenate gasoline, which reduces volatile organic compounds and carbon dioxide, which in turn slows down global warming. Some gasoline used by boaters and other recreational users is exempt from the mandate.

Florida consumes over 20 million gallons of gasoline a day and when 10% of that is ethanol we’ll need in excess of 700 million gallons of ethanol per year. All that ethanol is imported from other states and countries and blended into our gasoline at major ports like Tampa and Ft. Lauderdale.

Ethanol goes by many names but is basically the same alcohol we consume in our beverages. It is made by fermenting crops like sugar cane or corn and then further refining it into fuel. South Florida hosts a number of large sugar cane growers and many farms in north Florida grow corn. The Florida Department of Agriculture is interested in growing new energy crops that can produce ethanol in the state, thus creating jobs and keeping more of our fuel money circulating in the state’s economy.

Florida’s Department of Agriculture and the Department of Energy and Environment have granted more than $50 million dollars in the last few years to foster an ethanol business in Florida. Much of that money is focused on cellulosic ethanol instead of using food crops like corn or sugar cane. Depending on the kind of crop grown and how often it is harvested, Florida could produce up to 1500 gallons of ethanol per acre. Giant grasses and exotic leafy plants are being developed for this new sustainable energy crop. Plants convert less than 1% of the sun’s energy into cellulosic material. Good thing the sun’s energy is free.

Growing these plants will put half a million to 1.5 million acres of Florida’s agricultural land into productive use, create jobs, and make our state economy stronger. Depending on the process and the kind of material used for feedstock, ethanol costs about $2.00 to $3.00 per gallon to make. Work continues on making the conversion processes more efficient but as the price of gasoline continues to rise cellulosic ethanol becomes more attractive.

Creating cellulosic ethanol from the inedible part of plants, new plants or the daily trimmings of yard waste that our gardeners regularly gather from our homes is difficult and requires special processes and new genetically engineered enzymes. The University of Florida in Gainesville is leading the way with decades of research and patented new enzymes and bacteria developed to digest the cellulose in grasses, woody plants, and citrus peels to produce ethanol. This feedstock needs to be pulverized or cut into tiny pieces, heated and agitated so the bacteria can act on it. The bacteria breaks down complex compounds in plant cell walls to produce simple sugar molecules that can be fermented into fuel-grade alcohol.

Florida has good climatic conditions for bio-fuel and biomass production. However, large quantities of water are used in the growing of the plants and in the biofuel refining process itself. Water is an expensive and hard to come by commodity in Florida so plants capable of growing with less water are being developed.

Most likely in a few more years you’ll see acres and acres of new and different energy crops and new bio-refineries throughout Florida, helping us become more energy independent.