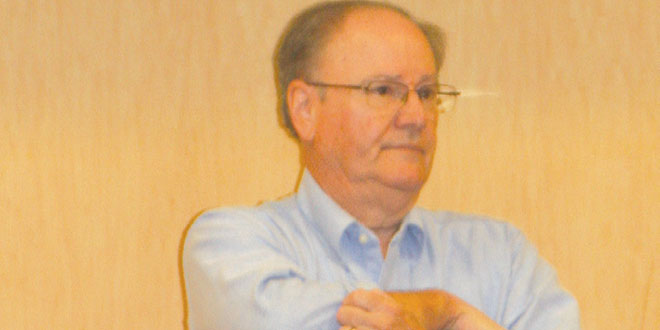 New Planning Board Chairman Dr. Marty Roddy rolls up his sleeves, ready to get down to business. PHOTO BY PAT NEWMAN

Marco Island Planning Board’s first meeting of 2015 focused on some lingering issues and addressed new business like allowing artificial turf and a temporary use permit for Rose Marina.

Dr. Marty Roddy took over as chairman following the resignation of Monte Lazarus. As a newly appointed city magistrate, Lazarus was required by Florida state law to vacate his seat.

The discussion will continue on how to handle mixed-use projects, based on the changing market and demand for residential growth. “What’s best for Marco Island?” asked Charlette Roman. “Let’s take time to digest that piece; it’s really a two-part thing,” she continued, referring to the balance between residential growth and the need for additional commercial projects.

The continuing debate over how to handle density credit transfers will be renewed at the board’s February meeting. The prickly and complicated issue was discussed in June 2014 and again in September 2014. The planning board agreed to impose a temporary moratorium of transfer rights until they could take a closer look and make a satisfactory recommendation to City Council. Drafting the proposed rental ordinance and the accompanying public hearings sidelined density credit transfers until now. In essence, the “issue of density credits is to stimulate the market in the downtown area,” according to City Manager Roger Hernstadt.

In a memo prepared by Betty Hernandez, city planning staff member, “the item was originally proposed in order to give an opportunity for developers to use credits as building incentives in the midtown district, but not penalize the city by removing any remaining waterfront credits from city records.” The three-point goal is to encourage renewal and investment in the city’s midtown district, reduce density and increase revenue to the city.

There are currently 352.8 commercial density transfer credits and 139.2 city-owned credits. In theory, a developer has to have at least 50 percent of the required density for a project to be eligible to buy density credit transfers. Once that is determined the developer can then buy up to a remaining 50 percent from the commercial market, and for each commercial block purchased must also purchase a percentage of credit transfers from the city at market price (the price paid for the commercial credits). The city’s credits would be retired and removed from the rolls with the city retaining the purchase price.

Determining the formula for setting the percentages of commercial and city raised the most questions with Roman, who finally asked for a one-page fact sheet with various options to be reviewed at the next meeting. A sample case of a hypothetical credit transfer case is available at the planning board’s site on the city of Marco Island website.