Deli Fest: More Than a Sandwich 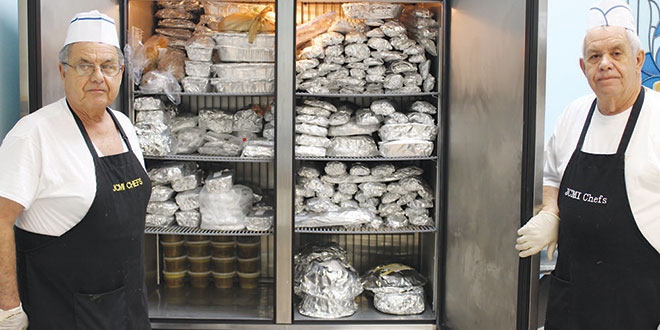 Bert and George show off a freezer full of pastries made by the ladies ofBubbie’s Bakery.

In preparation for the upcoming Jewish Deli Fest, the men of Bernie’s Deli have been hard at work cooking their famous homemade soups. Last week Coastal Breeze News visited the Jewish Congregation of Marco Island (JCMI) where the men were making their classic chicken soup with matzo balls. Also available at the Deli Fest will be their homemade beef barley soup, New York style deli sandwiches with kosher style corned beef or pastrami, and of course sweets from Bubbie’s Bakery.

It was the first cold day Marco had seen. Walking into the JCMI you could smell the warm chicken soup cooking in its industrial sized pot, inviting anyone who happened to walk by into the kitchen. The men had

already chopped the parsnips, carrots, onions, chicken and parsley and were busy cooking the broth in batches. The chefs would stop to taste it here and there to determine whether or not it needed more time to soak in the flavors of the chicken. They even let me have a spoonful with a warning that it wasn’t ready yet, though it tasted really good to me. They say that they made an impressive 2,000 servings of soup.

This is the Jewish Deli Fest’s third year and the men expect it to be as big as ever. Bert Thompson of Bernie’s Deli walked me through the congregation and explained what the set up would be like. At the day of the event 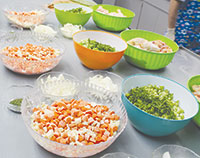 Some of the prep work for the chicken soup. Approximately 2,000 servings of soup were made.

there will two lines going into the building, one for take-out food and one for eating in. There will be indoor and outdoor seating available that will be able to accommodate large groups of people. Bert assured me that the congregation is more than ready for the big crowds. He also suggested that if you don’t want to miss out on any of your favorite dishes that you should probably try and get there a little early.

To enjoy the homemade soup and other treats come to the Jewish Congregation of Marco Island on Sunday, January 24th between 11:30 AM and 3:30 PM. The congregation is located at 991 Winterberry Drive. All are welcome! For more information visit www.marcojcmi.com or call the office at 239-642-0800.