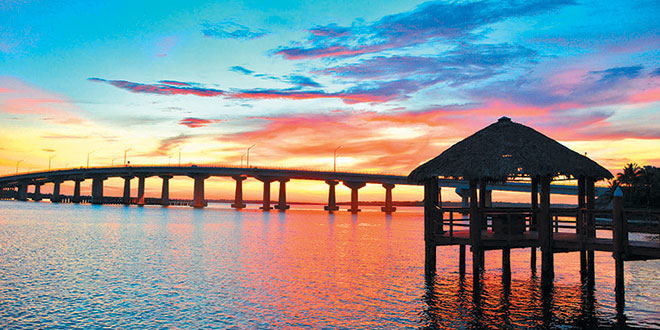 It is one of those beautiful Sunday mornings in Marco Island.

I am crossing the Jolley Bridge on my way to Naples to make a presentation on Islamist terrorism. It is just about seven o’clock and the sky in the east is bright red, just as the sun rises over the Everglades.

I am excited and a bit nervous. I may be facing a crowd that is not particularly in line with my ideology, beliefs and thoughts. As I drive on the downward slope of the bridge, leaving Marco Island behind me, many thoughts begin to cross my mind.

We live in a beautiful part of our beautiful country. This may be the most beautiful spot in the whole world as far as I am concerned. I start to think about the people I will be talking about. Islamist terrorists! What are they doing this exact moment? What sick plans are being made somewhere in smoke-filled dark rooms in dilapidated dirty apartment buildings in old Europe? I am wondering if they even noticed the sunrise earlier in the morning!

Who are these people? What moves them to strap suicide vests on their bodies, blow themselves up and kill many innocent men, women and children? What makes them so evil?

We may never know for sure.

I continue to drive towards Naples on Collier Boulevard. Many new buildings appear every day on the east side of the road; a huge new shopping center ready to open big name stores in the corner of Tamiami Trail. Every new building represents new hope and big dreams for me.

I wonder if the Islamist terrorists have any dreams or hopes for the future? Are the bomb makers real human beings or are they the representatives of

the devil on Earth? It is hard to tell, I guess.

There is quite a lot of traffic for an early Sunday morning. Cars coming towards Marco Island, cars passing me on their way to I-75.

I continue to drive and think. The sun is up now; it will be a beautiful Sunday.

Just a few months ago, terrorists killed many in Paris, France. Just a few days ago, they killed more innocents in Belgium. Pretty soon they will kill more somewhere else. For me, a modern thinking, educated person this all does not make sense. What have they achieved other than making the rest of the Western world hate them! For me, our every action must be meaningful, positive and productive. What could be less positive, less meaningful and more negative than going into an airport and blowing yourself up to kill as many innocent people as you possibly can? How stupid is this action when you can’t even see the results of what you have done!

These actions do not change anything to help the Islamist terrorists achieve their goal of world dominance. Just the opposite happens; our resolve gets stronger, our desire to do away with these people rises to new highs. Someday soon, the world will get together and decide to completely eradicate these evil-doers. I will be one of them.

As I turn on to I-75 north and see the four-lane highway in front of me, I think of all the magnificent achievements of our country in her short history. Right up the road in Ft. Myers is the museum of one of the geniuses of the last century, Thomas Alva Edison. He used his God-given intelligence and talents to better the world and not to destroy it.

Are there any geniuses amongst the bomb makers and suicide bombers of the world? And if there are, where are they?

We are all human beings. We are born the same way. I wonder what happens afterwards to make these people so evil?

I get off my exit and stop to buy my first hot, strong cup of coffee of the day. The small convenience store behind the gas station is already filled with migrant workers on their way to work. The smell of coffee mixed with early morning burritos and yesterday’s sweat fills the stale air of the small shop. These workers work for subsistence level wages picking tomatoes and other fruits and vegetables in the local farms. They do not sit home and make bombs to kill as many innocent people as possible! They certainly could. But they press on; work sun-up to sun-down to make an honest living, while seeing the wealth that surrounds them every single day of the week.

I arrive at my destination. No one has showed up yet. Maybe no one will. It is always a last minute anxiety when you have no idea as to what people think and do.

My thoughts will continue, and hopefully evolve, as I get older, not wiser but possibly more confused than ever. I still do not understand why someone would choose death over life. I wonder if these Islamist terrorists realize that they can’t kill us all. They can never achieve their goal of world dominance this way. Until they learn to respect people who look different, who talk different and who believe in the same God as they do.

And I have not lost all hope yet…

Tarik Ayasun is president of the Marco Island Charter Middle School Board of Directors and has given many years of service of community service to various organizations. Tarik Ayasun at turk1949@comcast.net