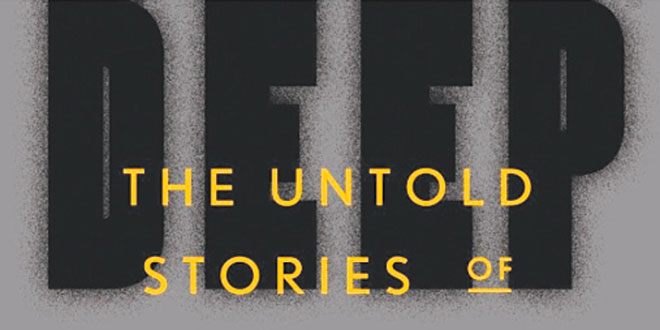 “Deep Down Dark: The Untold Stories Of 33 Men Buried In A Chilean Mine, And The Miracle That Set Them Free” is the complete title of this account of the August 2010 accident at San Jose Mine near Copiapo, Chile.

When the men of A shift report for work on Aug. 5, 2010, most of them are aware of the thunder-like noise and dust, or “smoke,” coming from the mountain mine. A few are even aware of the half-inch crack in the entrance ramp that formed a few months prior. Most are not aware that the escape tunnels are devoid of ladders, that the “Refuge” or “safe room” on level 90 of the mine is outfitted with only a two-day supply of food for a regular shift of 16 men.

The A shift on this fateful day has swollen to almost twice that number of miners and mechanics with men making up time missed or working overtime. The San Jose owners know the mine is not safe that it lacks the ventilation system mandated by the Chilean government much less the movement detectors that would have been a heads-up about the shearing rock. They themselves spend as little time as possible at the San Jose and turn deaf ears to any information about required maintenance. Profit, not protection of workers, is their priority apparently.

At lunchtime, around 1 PM, on Aug. 5, 2010, the men inside the San Jose mine are working on different levels. Some are moving to the Refuge on level 90 where the lunch truck will be picking them up for the drive to the surface for their mid-day meal. Accustomed to noises emitted by the mountain, the men’s attention is nevertheless piqued by the difference in this noise. It sounds like blasting which has not been scheduled for that day. Before they completely grasp their circumstances, they are assaulted by an escalating rumble, a sudden wind and cloud of pebbles and fine dirt. They run for the Refuge. Other men are still working, wearing protective ear gear, and do not become aware until they are hit by blasts of wind and dirt.

On the surface, Raul Villegas emerges from the mine entrance in his dump truck, the only one of the 34 men in the mine to make it out. Eventually, they learn that a block of stone the size of a 45-story building has broken off the mountain. It is blocking any chance at using the ramp to get out — or in! The general manager, Carlos Pinilla, and Pablo Ramirez enter the mine about 5 PM and discover the megablock. It is 550 feet tall and weighs about 770,000 tons. When it fell, it “pancaked” the mountain.

The hardened macho Pinilla began to cry, certain that the miners and contractor mechanics had to be dead. He and Ramirez surface and report to the owners, Marcelo Kemeny and Alejandro Bohn, that the only possible escape for any left alive would be the escape tunnels or chimneys. Such an attempt would require trained rescue police, the only people with that expertise and equipment. This means notifying the authorities.

For some reason, Bohn 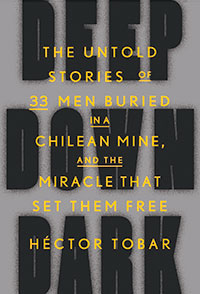 and Kemeny do not use the landline at the mine, but head down the road until a cell phone signal kicks in, and at 7:22 PM, report the tragedy. The message is passed through a few layers of government until the Special Operations Group of the Chilean police send six men with climbing gear to descend the chimneys. An hour later, they arrive at the mine and immediately start their mission. They have a flat tire on the ramp, where the crack has now doubled in size. “If the police unit were to know that the crack is new, and how much it’s grown in the past two hours, they might realize how unstable the mountain is and halt their rescue effort. So in Ramirez’s account of the moment, as the police get out to quickly change the tire, Pinilla looks over to Ramirez and places a finger against his lips.” Call me jaded, but maybe Pinilla’s tears three hours earlier were more for himself than the men he had sent down that day. Oh, and no one at the mine tells the families about this accident.

This is a just a brief outline of the beginning of this story. Hector Tobar’s style is journalistic, highly descriptive and compelling. He enriches this gripping story each step of the way by personalizing these men for the reader. Their marital and family status, personal quirks, religiosity, financial situations, amplify their role in this fascinating event. Tobar also describes the socioeconomic condition of the men, their wives, girlfriends, mistresses, and other family members. He also sketches the sociopolitical culture of Chile, clueing the reader in on the environment that led to this accident and its aftermath.

From Aug. 5 to Oct. 13, 2010, 33 men are trapped in an underground mine. For the first 17 days, they are convinced they are completely alone, but they pull together, eat together every other day (100 calories), drink dirty industrial water, pray together, willfully decided not to act on the anger they might feel for another man in the group, and they grow weaker hour by hour. On the 17th day, one of the drill bits breaks through near them, and they know they will be rescued. Everything changes. Tobar documents it all — before, during and after.

If you wrote this story as fiction, no one would believe it because it is so unlikely, but it is the story of 33 men plus all the people in their lives. It has been made into a movie starring Antonio Banderas and Juliette Binoche among others, set to be released sometime this year. I have no idea how good the movie will be, but it could not possibly encompass all the great details Tobar has included in this book.

Available in all formats just about everywhere. Good easy read that will both inspire and perplex you. 4.25/5.0.