David Lee Thompson Exhibit at Museum of the Everglades 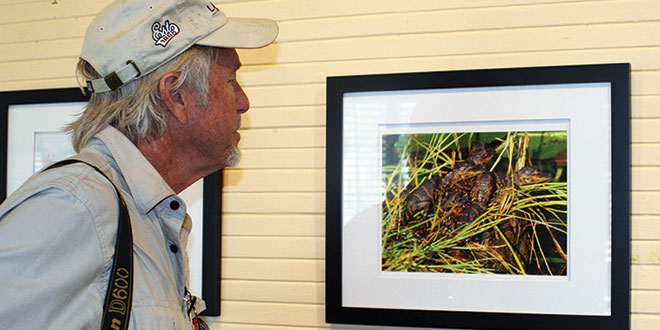 The Everglades unfold mile by mile along the Tamiami Trail (41) as mangrove swamps give way to green hammocks, shallow canals and bursts of seasonal color. David Lee Thompson’s collection, “Primordial Everglades,” captures the panorama and the natural minutia of Florida’s natural treasure.

His photographs are on display through Jan. 31 at Museum of the Everglades in Everglades City. Thompson was on hand to discuss his work at the exhibit opening earlier in the month.

“I love creating art, which is a natural and important part of my life,” Thompson explained. The Florida native has been working at his craft for 30 years, starting as a youngster in Hillsborough County where he recalls “running around in cow pastures” taking pictures until he was summoned home by his mother. Thompson grew up in the Tampa area and experienced Florida “BD,” or “Before Disney” as he joked, when jalousie windows were the norm and air conditioning was a luxury. He spent a lot of time outside documenting his view of nature, and in his late teens and early 20s, Thompson was getting positive feedback from families and friends.

“People liked my photos,” he said, which was the catalyst to traveling around the western United States with a camera taking pictures all over his home state.

While he earned a degree in AgroBusiness from Tampa Bay Tech, Thompson’s heart was in the arts. He accumulated as many images as he could and started

Jennifer Perry, director of Museum of the Everglades, and David Lee Thompson discuss some of his photographs at the opening reception. PHOTO BY PAT NEWMAN

his business in stock photography. Today, he has successfully transitioned from stock images to fine art photography and creative arts. Soft-spoken and unassuming, Thompson said, “I let my art and hard work speak for itself. Living in Florida, I have developed a great appreciation for the natural world. It’s the foundation from which my creativity springs.”

Thompson is a self-trained artist and likes to combine mediums like oils and acrylics, and create edgy three-D images. His experimentation with different camera filters, off-camera techniques and computer images gives many of his pieces an ethereal or pop-art quality.

Included in the current exhibit are black and white and color photographs.

One of his works, “Everglades Morning,” zooms in on a host of spider webs discovered in the Papaya Hammock. Another, “Alligator Nursery,” captures a clutch of baby alligators nestled in leaves. There are Royal Palms silhouetted at sunset and a Howling Anhinga, beak wide open, offset by reddish foliage.

Obviously, these special images are not always snapped on an hour hike through the Everglades National Park. Thompson camps out with his potential subjects, for as long as two weeks at a time. “The more time you spend outside in the field, the better,” he said.

Thompson is a strong supporter of Everglades protection. His art is not only a beautiful image, but more importantly, a tool to educate and enlighten people about this national treasure.

Thompson’s extensive collection of work can be viewed and purchased at DCLTphoto@aol.com.