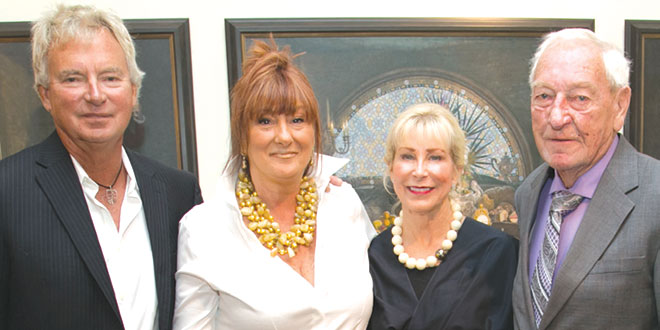 Tom and Vicki Williams (left) are pictured with Florida’s First Lady Ann Scott and Darrell Loan at the 2013 Florida Book Awards reception. PHOTO COURTESY OF THE STATE OF FLORIDA

What do a pony and a faulty latch, greased pigs and a donkey have in common with Top-Secret Crypto security clearances, atomic bombs and modern-day ballistic missiles?

Loan’s name maybe conspicuously absent from the history books, but he was instrumental in catapulting the United States to the front of the Space Race in the 1960s. He spent 26 years with NASA trying to maintain America’s supremacy in space, working as an aeronautical engineer. While Loan never flew a space capsule or sat in the cockpit of a shuttle launching into orbit, he was there — behind the scenes — from the first satellite to landing a man on the moon.

Marco Island resident and author Tom Williams immortalized Loan’s story in a book called “Surrounded By Thunder: The Story of Darrell Loan and the Rocketmen.” Released in August 2013, the book recently received a gold medal in the 2013 Florida Book awards, the most comprehensive state book award program in the country created to honor the best work written by Florida authors and about Florida culture in the previous year.

“Thunder” chronicles Loan’s unlikely journey from a young boy in Iowa trying to understand the impact of the Great Depression and his youth as a celebrated high school basketball star to his collegiate studies at the University of Iowa and his service as a U.S. Army tank commander in Korea to his engineering work with Great Neck, Long Island-based Sperry Corp, the development of the America’s first large ballistic missile Redstone by the Chrysler Corporation Missile Division and the creation of NASA. He worked alongside such historical figures as famed German rocket engineer Dr. Wernher von Braun and Kurt Heinrich Debus, the World War II German V-2 rocket scientist who eventually became the first director of NASA’s Kennedy Space Center.

In fact, without Loan’s work, no one would have heard Neil Armstrong say, “That’s one small step for man, one giant leap for mankind.” Loan designed the 5-watt communications system that allowed the astronauts to communicate with mission control.

It was this unmined story that had 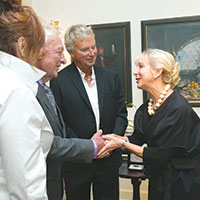 Darrell Loan shakes hands with the First Lady of Florida Ann Scott. Loan attended a reception at the Governor’s Mansion in Tallahassee with author Tom Williams and his wife, Vicki. The reception honored those books recognized by the 2013 Florida Book Awards. ‘Surrounded By Thunder’ received a gold medal. PHOTOS COURTESY OF THE STATE OF FLORIDA

Williams chomping at the bit to write it shortly after releasing his first novel, “Lost and Found.” “I grew up in a small town in eastern Tennessee, and I grew up watching (the Space Race) happen with such great fascination. I fell in love with whole space program thing, and watched every space shot.”

His first meeting with Loan was at the Marco Island Moose Lodge. The two men were sitting there, Loan with a martini and his ubiquitous pack of Marlboro Lites and Williams with his legal pad. “I kept thinking this is going to be really hard,” remembers Williams, and then Loan told him a story that forever changed their relationship.

Williams says: “He said that Chrysler would build the fuselage of the Redstone ballistic missile in Detroit at the industrial reserve aircraft plant and then ship it to Huntsville, AL, where the German engineers were. The missile would then be trucked to White Sands, NM, for testing. He actually said that was when Betty Crocker would show up because General Mills, which made grain elevators at the time, also made part of the launching system for the missile.

“Now, Darrell was the guidance engineer for the missile, and he wanted to be really close to what was going on during the launch. He told me they had to be up close to see. He then told me that they took a bulldozer and created a huge wall of sand about 50 feet from the launch site. Now, mind you, all of the German engineers were safely tucked into a concrete block house about a mile from the launch site, but not Darrell, he was right there. That was the moment I knew. I had to tell the story of that kind of cowboy engineering.”

When you ask Loan about his life, work and the process of putting the book together, his responses are very modest and matter-of-fact. There is no bravado, and he shrugs off the accolades. It was just the life he lived.

“There was a lot 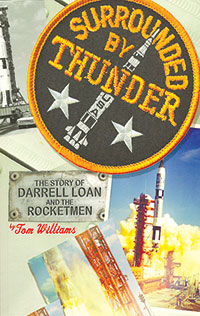 going on then, and most of it was not good,” Loan sighs as he takes a puff of his cigarette. “We made a lot of mistakes, but they have it straightened out now.”

“It was interesting,” he adds about working with Wiliams on the book, “because it brought back memories of people I knew and things we did. It was an experience.”

Today, he splits his time between his home in Marco Island and another in Cedar Rapids, IA, where he ran a quarry for 35 years after leaving NASA. He also owns about 2,000 acres of good, rich Iowa farm land where the fields are sown with corn and soy beans. He focuses on his family — daughters Kathy and Debra and son Michael — and he has six grandchildren.

When asked if the team of which he was part understood the magnitude and depth of the work they were doing, he says, “Of course, we did realize it. We were going into an area that no one has explored before. It was very exciting to think that we did the things no one else could do.”

Still, Loan laments the direction the U.S. has taken in recent years when it comes to space exploration: “I don’t think there is enough emphasis to inspire the kids to pursue work in space, especially now that NASA has been disbanded. That was a terrible.”

Both he and Williams hope “Thunder” will help reignite — if even in a small way — the fire in young people for space. “I want (the book) to be something that goes into schools for high school students to read,” says Williams. “This is one of the most fun stories, and all of the side stories not in the history books are in this book…The story is the perfect example of how technology is constantly changing the future. The bigger the goal, the more rapidly the technology in the future changes. Everything we have today is a spin off of the work done there and at NASA. They were sitting at the first PCs at mission control. It blows the mind.”