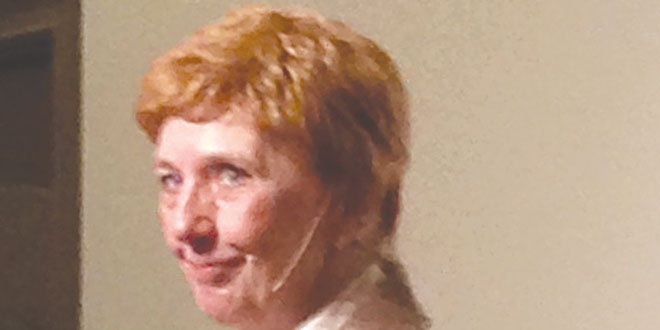 On Tuesday, Sept. 2, the Marco Island History Museum’s Rose Auditorium hosted a packed house for the presentation of “Daring to Dream,” an original dramatic portrayal of the life and last flight of Amelia Earhart. The allotted hour flew by as local actress and writer, Janina Birtolo, delivered a fast-paced memoir, simultaneously humorous and heartfelt, detailing the famous aviatrix’s exploits.

With her one-woman-show, Birtolo kept listeners at the edge of their seats from the moment she took the stage, appearing as if she’d just touched down from another soaring flight. Fully-costumed and impossibly energetic, she virtually transformed into Amelia Earhart imparting colorful childhood stories, tales of adventure and telling of seemingly impossible dreams. In fact, some questions at the end of the show were accidentally addressed to “Amelia” as if the long-dead historical figure had told just told her story in person.

Earhart sometimes set out on adventures with reckless abandon. Due to lack of funds and her disposition, it is believed her ultimate end most likely came by way of her tendency to sometimes fly without the proper equipment and preparation. Her disappearance in 1937 inspired numerous theories as to how she met her fate — theories that continue to spark debate even today.

Born and raised in New Jersey, Birtolo wrote “Daring to Dream” to be both a biographical story and an encouragement to reach for the stars. Amelia Earhart is just one of 11 historical females she portrays in similar fashion. She said that a sense of personal connection prompts her to make her plays more than just a re-telling of each woman’s life, instead searching out the lesson their lives embodied and the message they would share with us today.

Birtolo also works as a freelance writer, and has been published nationally and in local publications including “Gulfshore Life,” “Times of the Islands,” “Naples Health,” as well as various not-for-profit organizations. In 2001, she was named “Writer of the Year” by the Florida Magazine Association. She was commissioned to write “Daring to Dream” by the Zonta International chapter in Naples to help celebrate both the founding of the group and the role that Earhardt, a Zonta member, played in the national organization.