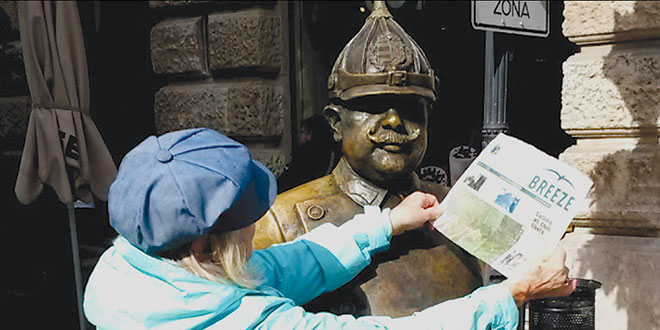 Coastal Breeze News is read everywhere, even by statues in the center of Budapest.

There once was a city called Pest, pronounced Pesht. It sat on a bend of the Danube River opposite a city called Buda. No joke! They stood separated by the river for hundreds of years. Sometimes they were part of the same country, sometimes not. Sometimes opposing armies faced off over the river.

At some time before present memory they joined and compromised on the name Budapest. Budapest is a fascinating city with a colorful history, a city that mixes people of varied backgrounds who are proud of their common history. This city is the capital of Hungary.

We spent two days in Budapest. But first we had to enter Hungary.

Normally on this river

It was obvious the razor wire at the border crossing into Hungary was hastily added recently. We were told not to take pictures. PHOTOS BY CARL AND JOAN KELLY

cruise our passports were kept in the ship’s office, so that when the ship docked in a new country in the pre-dawn hours, the customs officers could come aboard, check and stamp our passports, all before we rose and went to breakfast. Easy border crossing.

Not so in Hungary. We were given our passports and sent to the border crossing by bus to meet the ship up river in Hungary. At the crossing we exited the bus, retrieved our baggage from the bus’ belly, and dragged it, passports in hand, across the border for the agents to check individually and stamp.

As we trudged across the border we noticed a long, hastily constructed fence with new razor wire, put there 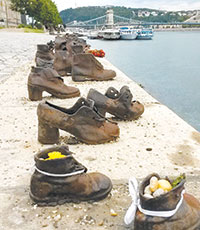 Budapest displays its soul with an unusual monument in memory the Jews who were forced by the Nazis to jump to their death by drowning in the Danube River.

apparently in anticipation of refugees from the east. This border crossing was not easy, but it was educational. We were told not to take photographs, but get-the-story journalist that I am, I sneaked a smartphone pic of the crossing, razor wire included.

I wonder if the Hungarian politicians understand what they communicate to us by insisting that we cross their border where we can see how they are forcibly denying entry to others. Or, I wonder, was it Grand Circle that chose to send us through this border crossing learning experience.

On to Budapest. It is a city that has been destroyed and rebuilt several times. Presently, it is 50- plus years and 80 or 90 percent into the current 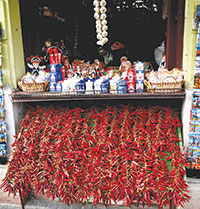 Hungarians grow and sell a lot of paprika. It is displayed both in the original form and as a ground spice, insideand outside the shops.

rebuilding cycle. Restored 18th century buildings stand beside the unrestored, and they beside the soviet cubical slabs that pass for architecture. The restored buildings are magnificent and the residents are rightfully proud.

We walked the streets of Budapest. Many of them are pedestrian-only streets, an urban shopping mall. They are lined with shops selling everything the tourist, or resident, could possibly want; ma and pa shops selling local crafts; small grocery stores, all touting their paprika; tiny cafes with seating in the street; large, classy emporia displaying high end celebrity name brands; five star hotels and restaurants to match; city parks and plazas with statues and street entertainers.

We walked the quay and found a very unusual monument, dozens of 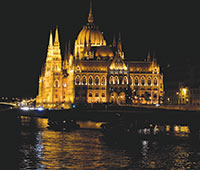 Budapest lights all the historic buildings at night, becoming again the 19th century city of beauty and romance.

We cruised the Danube at night. The night, with the grand historic buildings fully lighted, returns Budapest to its romantic past.

The city is beautiful; the Danube romantic; the people impressive, industrious, determined, proud. But, we leave with conflicted feelings. It is hard to balance the grandeur of the buildings and the compassion of the shoes with the razor wire of the border fence.

I expect the people of Hungary are also conflicted.

Check out Grand Circle at www.GCT.com.