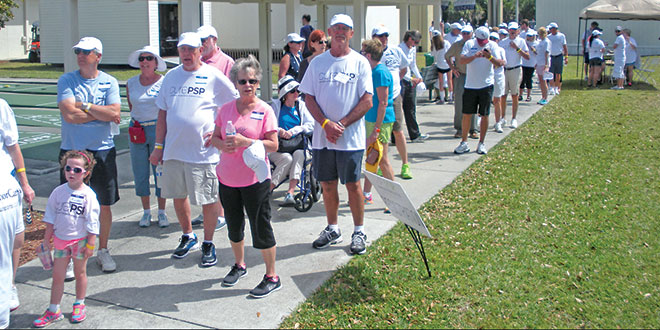 Al and Heather Geraci have made a pilgrimage to Marco Island at about the same time for three years running to support a cause.

The couple has made the trek from their Ft. Lauderdale home to participate in the annual CurePSP Awareness & Memorial Walk, a fundraiser benefitting CurePSP, a national nonprofit that helps fund research, educate healthcare professionals, and provide programs and services to support PSP suffers and their families.

Progressive Supranuclear Palsy, PSP, is a progressive, incurable and difficult to diagnose brain disorder, similar to Alzheimer’s, Parkinson’s and Lou Gehrig’s diseases, that eventually leaves its victims wheelchair bound or bedridden. According to CurePSP, the disease strikes five to six out of every 100,000 people, but only about one third of them receive the correct diagnosis because it’s often misdiagnosed as Parkinson’s or Alzheimer’s.

“My mother (Suzanne Groper of Ft. Lauderdale) passed away two years ago from PSP, so we’re here walking for her, raising awareness about a very rare disease that a lot of people don’t know about,” said Heather Geraci. “My mom actually came with us one year and did the walk

in her wheelchair, which was really nice. It’s a great event.”

Held recently at Mackle Park, the 12th Annual CurePSP Awareness & Memorial Walk attracted about 300 participants, said Christina Dean, of Marco, who is a member of the Southwest Florida PSP Support Group, which organizes the fundraiser. She was hopeful that the event would generate roughly $40,000, the amount that was raised at last year’s walk.

“We’re just here to support them (PSP sufferers, their families and friends) and to support the concept behind getting the word out, education and trying to find a cure,” said Dean.

Cindy MacDonald, who coordinates the walk for the Southwest Florida PSP Support Group, described herself as being “very, very pleased” with the turnout. “We’ve got people from all over the country. It’s almost, you build it and they will come.”

After a roughly one-mile jaunt around the Mackle Park lake, the walkers proceeded to the basketball courts, where there were tables, live music, food, a silent auction, prizes and other activities.