Editor’s note: Heather Woodward is a graduate of Lely High school and the University of Florida, where she majored in philosophy. For the past four years Heather taught English to students in various grades in Xian, China, before moving to Vietnam where she is currently teaching. Heather is writing about her experiences in Asia.

It is said that the Chinese will eat anything with wings except airplanes and anything with legs except tables. Over the last four years of living abroad, I have learned to embrace this philosophy of eating anything and everything. Some unintentional mishaps contributed to my adventures. One of my first memories of this incredible experience happened in 2008. I lived in a small, countryside town in Hunan province in Southern China. At the time, I was preparing for becoming an English teacher in China. My Chinese manager invited a few foreigners and me out to dinner to celebrate our observance of Christmas. We ate a big dinner, wore Santa hats, and sang Christmas carols. After the meal, I told him that my favorite dish was the beef. He looked puzzled and said, “There wasn’t a beef dish.” “Oh, you know,” I replied, “The one with the white lentil beans.” “Oh!” He exclaimed, “That dish didn’t have beef in it. That was dog!”

I don’t know what’s worse: eating dog for Christmas dinner or having admitted to liking it. But that is what happens when you live abroad. You learn to expect the unexpected such as eating dog on Christmas with your Chinese coworkers. This type of experience is apparently common throughout the world. Many in France, for example, are averse to eating corn, since they believe it’s only for feeding the animals. Meanwhile, 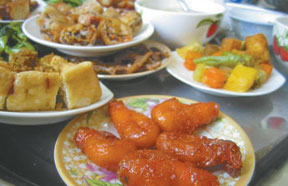 Served at a Buddhist funeral.

they enjoy their own specialties such as snails that some Americans won’t touch.

For the last two years, I’ve been living in Ho Chi Minh City, the old Saigon, which is situated in Southern Vietnam. Last year I was going through a really tough time. It was difficult to move from China to Vietnam, and I was having trouble adjusting. I told this to one of my Vietnamese friends, Thanh, and she insisted on taking me out to dinner. She took me to a small cafe that was dimly lit with small, aluminum tables and chairs. We sat down and she ordered for us. As I looked around, I noticed that everyone was eating with tiny spoons. Soon, the waitress brought out the food, which consisted of two plates. One plate had small quail eggs on it and the other had larger duck eggs with loads of herbs and leaves on the side. Thanh started hitting the top of one of the quail eggs with a tiny spoon. “Oh!” I said; “We’re having hard-boiled eggs for dinner!” Thanh smiled brightly and scooped up the contents inside the egg. I looked down at it and realized that that wasn’t a hard-boiled egg. It was a fetus–a quail fetus! Later I learned that, in Vietnam, people believe eating duck and quail fetus will change bad luck into good luck. As a friend Thanh had brought me to this restaurant to change my luck. Even though at the time I didn’t know about the possible impacts to good fortune, I did eat both the quail and the duck fetus. They were actually tasty! And for the record, my luck changed and I’m happier and more adjusted to life in Vietnam than 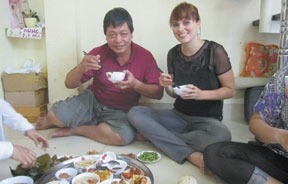 ever before! Maybe they know something about good fortune that I don’t know.

My Asian experiences remind me of my early years on Marco Island. I recall when my sister and I were growing up and were on vacation from school. Our Dad would say, “If you don’t behave yourselves, we’re going to the Roadkill Cafe.” Dad claimed that this cafe served only squirrel, snake, possum, and gator; basically, anything you can find on the side of the road. His threat scared my younger sister and me half to death, but important to note to parents, it also kept us quiet and well-behaved. Who on earth would want to eat those crazy things? Nowadays, the Roadkill Cafe seems tame compared to what I’ve eaten in China, Vietnam and even in the United States. Meanwhile Dad’s threat seemed to have had the opposite effect on my sister. She became a full-fledged vegetarian.

In the last four years, I have eaten donkey, snake, camel, alligator, duck feet, scorpion, bee larvae, pig’s brain, cricket, pig’s intestines stuffed with congealed blood, tea made from the feces of worms. From time-to-time it did take a bit of courage. All the while, not once have I stepped into the Roadkill Cafe! That must be some sort of accomplishment! In all honesty, I feel so very fortunate to have the opportunity to live abroad and travel. It exposes me to many different kinds of cultures and foods that I would not have been able to try had it not been for me being abroad. The foods I have eaten are strange in our culture, but I always try to remember that some of the habits and traditions that we are familiar with also seem odd to those in the Far East.