Cuba: On the Road to Cienfuegos and Trinidad 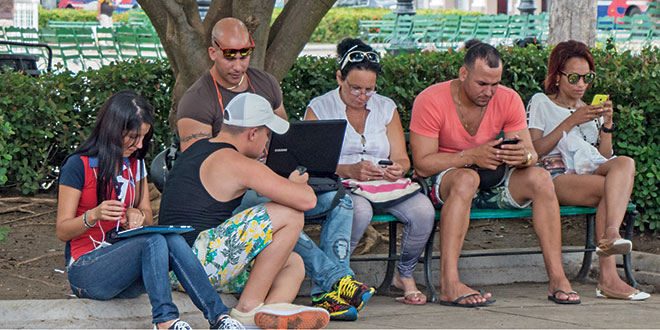 Parque José Martí is WIFI enabled, a rarity in Cuba.

Three and four hours east of Havana, on the Caribbean side of Cuba, are two UNESCO World Heritage Sites, Cienfuegos and Trinidad. Both are colonial cities, the first with obvious French influence, the other Spanish.

The highway from Havana to Cienfuegos and Trinidad was in good condition, but many of the secondary roads appeared to be more primitive. Traffic was light; we passed a few Yank Tanks, those American classics from the 50s, Ladas, other Russian and some Chinese makes of cars, and some horse carts. Outside of Havana, there was a Mercedes Benz dealership; certainly only a non-national or member of Cuba’s one percent has the money to buy one. Because many people cannot afford cars, Cuba is a place where hitchhiking is still alive and well, and we saw evidence of this along the way. Bus stops dotted the highway; many people waiting there held umbrellas against the sun.

We passed sugar cane fields, rice paddies, small herds of cows, larger herds of goats, and the occasional worker with a machete clearing a field. There were billboards spouting propaganda, most of them political in nature, although there was one touting an area beach and another advertising a tourism

website. Near Cienfuegos, there were thermoelectric and petrochemical plants.

At a roadside rest stop with a restaurant and gift shop near the turn off for the Bay of Pigs, the sinks in restrooms were adorned with fresh flowers. A proud, older gentleman invited people to see his banana trees growing out back and handed out samples; he refused money that was offered.

Although it was not unusual to see mule or horse drawn carts around Havana, as we got closer to Trinidad, they were more and more the preferred mode of transport. Public transportation is not good here. The people cramming bus shelters were waiting for one-horse carts that seat eight to ten people. A crew making repairs on the side of the road worked from a horse drawn vehicle.

Cienfuegos, the third largest port in Cuba, was an architectural delight. Although first discovered by the Spanish and visited by such privateers as Sir Francis Drake and Henry Morgan, it was developed as a planned, gridded city by the French, primarily from Bordeaux and Louisiana, in the early 1800s. Best described as eclectic neo classical, there were wide, colonnaded avenues lined with elegant, balustraded buildings. The main focal point was Parque José Martí 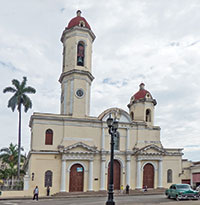 with its stately trees, marble statues, a gazebo, and a miniature Arch de Triumphe. The park was WIFI enabled, so its benches were inhabited by people furiously tapping away on smart phones or working on tablets and laptops; not a typical sight in Cuba. The park was ringed by a church, Catedral de la Purisima Concepción, with stained glass windows imported from Paris and Barcelona and other public and government buildings. They were painted a rainbow of pastel colors, embellished with decorative bas-reliefs that resembled icing on a cake. The Teatro Tomás Terry, featuring gold leaf mosaics, has hosted performances by such notables as Sara Bernhardt, Anna Pavlova, and Enrico Caruso.

While my husband availed himself of one of the benches in the park, I visited the Casa de la Cultura Benjamin Duarte. Once known as the Palacio de Ferrer after the sugar baron who resided there, it had a cupola (mirador) that provided a view over the city. The eclectic interior with its marble floors and staircases and decorative features including Moorish inspired tile work and neo classical bas relief walls and ceilings was quite lavish, but in moderate disrepair. The winding, wrought iron staircase leading up to the outlook

looked a little shaky, but seemed in good repair as I climbed it.

The palm tree lined Malecón in Cienfuegos was short, but elegant, passing by the Yacht Club as it lead to Punta Gorda, the once aristocratic and still lovely neighborhood jutting out into the bay. Stately nineteenth century villas and palacios turned to brightly colored wooden homes from the early to mid twentieth century as we reached the tip of Punta Gorda, and it was there that we had lunch, feasting on an array of fresh fruits, vegetables, and grilled meats while looking out to Cienfuegos Bay.

Trinidad, founded in 1514 and known as the Village of the Holy Trinity because it was the third town established by the Spanish when they explored what is now Cuba, was a well-preserved Spanish colonial town. In Havana, housing was of both old and new construction, but in Trinidad, all the houses have been declared “heritage,” and modern architecture is not allowed.

Prior to the economic crisis in Cuba in the 1990s after the fall of the Soviet Union, there was a federal budget for preservation. During the crisis, this support stopped as money was diverted to more pressing needs, such as education. Trinidad 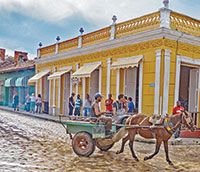 then became self financed for preservation. Tax money doesn’t go to the federal government; instead it goes to the city’s historic office. They use 45% of the money for restoration in the historic center, 25% for restoration outside the center, and 30% for social needs.

The Spanish Colonial architecture with its Moorish influence was seen throughout the city. Many of the once palatial houses (now duplexes) in the historic center had gated windows. In the nineteenth century, it was the custom that young, unmarried women would dress up in the afternoon and sit in the windows with their chaperones as they searched for eligible young men who walked by. Typical of the Spanish style, Trinidad’s main plaza, Plaza Mayor, was surrounded by a church and red tile roofed grand homes that once belonged primarily to people involved in the sugar industry. The well-landscaped plaza was decorated with frilly white wrought iron fencing and streetlights, a marble statue, two bronze statues of sleek greyhounds and tall green and white terracotta vases. Some of the buildings off of the plaza were decorated with tile work. The structures in the historic center and smaller ones outside of it were painted in pastel shades of 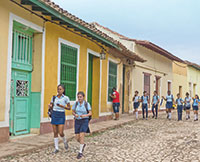 School children on their way to lunch in Trinidad.

amber, saffron, azure, and seafoam, with brightly contrasting trim. The cobblestone roads were made from river rocks and sometimes a bit tricky to negotiate. Donkey and horse drawn carts were frequently seen.

Trinidad is known for its pottery studios, many of which have been passed down through the generations, embroidery and knitting, tobacco, seafood, especially grilled lobster, and popular dance clubs, one of which is housed in a cave. The local drink is cancháchara, made from raw rum, mineral water, honey, and lime; it must be stirred constantly to distribute the honey.

Near Trinidad are popular beach resorts, the Escambray Mountains and Valle de los Ingenios (Valley of the Sugar Mills). Here, there are ruins of 75 sugar mills; the remains of plantations, slave quarters and a 147-foot tower testament to what was once a thriving business that helped build Trinidad.