Cuba for the Senses 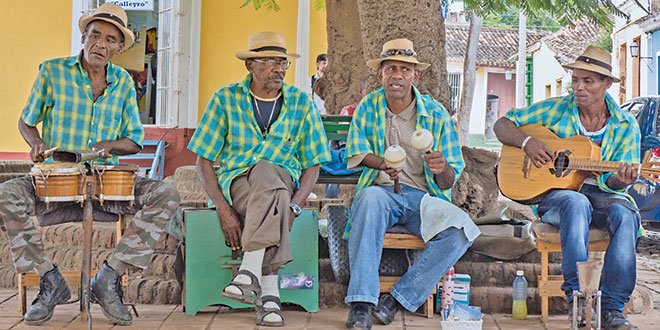 By the end of our time in Cuba, visiting three of its cities, the beach, and the mountains, I felt as if I was on sensory overload, for Cuba is a country that truly appeals to the senses. Visually, it was a delight. The first thing that struck me, flying over the island on the way to the airport in Havana, was how green everything was.

Once in Havana, there were bright colors and visual stimulation everywhere. There were the famous “Yank Tanks,” American cars from the 1940s and 50s, with their vivid colors; bubble gum pink, cobalt and turquoise blue, lime green, lemon yellow, bold lavender, tangerine orange, cherry and tomato red.

The bright mixing of colors of the cabaret performers at famous shows, such as the Cafe Parisienne at the Hotel Nacional or the Tropicana, was repeated over and over in minor shows at other locales, in the Carnival stilt walkers, troupes of whom parade almost daily in Old Havana, and, to a lesser extent, in the common dress of the Cubanos and the facades of many of the buildings. Brightly painted art was everywhere; in side hole-in-the-wall shops, modern galleries, small markets and the huge art market near the port in Havana.

There were the warm colors of the skin of Cubanos, reflecting the various cultures that have made up their country; the indigenous peoples, Spaniards, Spaniards mixed with Moors, French, Jews, Chinese, Haitians, 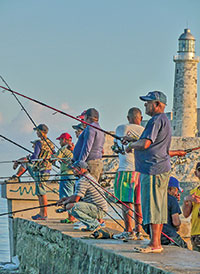 The sun rises on early morning fishermenalong the Malecón in Havana. PHOTOS BY VICKIE KELBER

African slaves brought here for the sugar cane industry. There was a full spectrum of beautiful colors and cultures.

Also visually appealing and equally as eclectic was the architecture representing Spanish, British, U.S., even Soviet influence. Styles include Moorish, Spanish Colonial, Greek, Roman, Baroque, Belle Epoque, Neo-Classical, Art Nouveau and Art Deco. There were grand buildings next to ones that were crumbling. Yet, somehow, even those in ruins seemed to retain their beauty. It’s no wonder that Old Havana, Cienfuegos, and Trinidad are three of the nine UNESCO World Heritage Sites in Cuba.

The vibrant sounds of the Latin beat emanated from bars and restaurants, as well as in parks and plazas. There were very few meals that we had that we weren’t within earshot of pulsing salsa, rumba, cha cha, reggae, even some jazz. At one seaside restaurant, there was no house band, but an enterprising group did stroll by, stopping to serenade us. Most groups were working for tips, often selling their DVDs.

Cuba certainly appealed to our taste buds. The sweet, silky taste of the ubiquitous daiquiris and mojitos, especially the ones made with honey that we had in Cojimar, Hemingway’s favorite fishing village. Honey seemed to be a popular ingredient, as it was included in the local specialty drinks we tried in Trinidad and up in the Escambray Mountains. The mountain drink, jincila, was also flavored with ginger, which gave it an extra bite. All 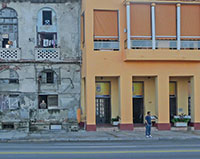 Renovated buildings stand side-by-side with those that are crumbling.

the drinks we sampled were made with what is fondly called Vitamin R. You guessed it…rum!

The food we ate included an excellent red snapper, three different servings of superb shrimp in garlic, decent dorado (mahi mahi), shrimp and lobster, an overcooked mahi mahi, and succulent roasted chicken. My husband assured me that the ropa vieja, a stewed beef (sometimes lamb) dish and roasted pork he had in various locales were also good. I liked the many vegetables and fruits. It was my first time eating pumpkin other than in a pie, and I loved it every time it was served. There were sweet potatoes unlike any I have ever eaten. A cool, creamy gazpacho that was offered in place of the typical ajicoa, a vegetable soup made with meat, was one of the best I have ever had. Of course, rice and beans and/or congri, rice cooked with beans, as well as fried plantains were served with most meals except breakfast.

Desserts included a rich flan, lots of creamy ice cream, a tangy mango marmalade with cream cheese that set my tongue on fire, too-sweet-for-me cake with icing, a refreshing pineapple liquor, and a wonderful fresh fruit cocktail served in a sugared glass. And then there was the strong, flavorful Cuban coffee…we had it served as espresso, cappuccino, Americano, and “black and white,” which was iced with cream. At a coffee plantation we enjoyed it flavored with 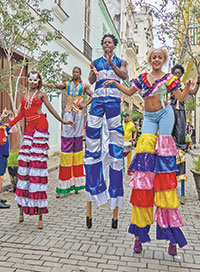 Cuba imports 70-80% of its food, so I don’t really know how much of what we ate was indigenous. It is forbidden to kill cows without a license, as they are needed to provide milk; the penalties are stiff. Almost all of the farming in Cuba is organic. This came out of necessity as a response to the food and energy crisis of the 1990s after the collapse of the Soviet Union and the withdrawal of their support. Since that time, scientists have worked closely with farmers to enhance natural pest control and make growing food as energy efficient as possible.

One needs to leave Havana to find experiences that appeal to the olfactory sense. Unfortunately, in Havana, the prominent odor (unless a cigar factory or store is visited) came from diesel fumes when a choking Yank Tank passed. Traveling the road up into the mountains was intoxicating from the strong scents of the varied flora along the way. And then there was the fragrant smell whenever we were in the vicinity of pork being roasted over an open fire.

Cuba is a sensual country; its music, its culture, its people. For me, there was nothing better than, first thing in the morning or in the evening, walking briskly along the Malecón, the 8 km. seaside esplanade in Havana. Here, watching the sun rise or set, seeing the many fishermen, lovers and other locals hanging out, passing by

The Yank Tanks reflect a spectrum of bright colors.

the beautiful, yet often crumbling buildings on one side while feeling spray from waves crashing over the sea wall on the other side, I felt the soul of the city.

Some have written that visiting Cuba is like going back in time. I didn’t feel that way at all. Yes, there was the unique feature of the Yank Tanks, but what I saw was a Caribbean island inhabited with people who have had a difficult time politically and economically, but have learned to be resourceful and have a strong sense of community, openly sharing with and helping each other. There is poverty and a lack of basic products. Both in Havana and more so outside of it, transport by horse cart and even horse drawn “buses” (larger carts) is common.

People asked for soap, toothpaste, shampoo. In the local markets I visited, supplies were scarce. In search of bottled water, one market had run out and another only had “con gas” (sparkling) water left. While visitors experience the bounty of choices at restaurants and the buffets at all inclusive resorts, the situation we found at the small cafe in the Havana airport was closer to everyday reality. Although the written menu was fairly extensive, including items such various pizzas, tuna salad and chicken, all that was available was ham, cheese, or ham and cheese sandwiches.

The Cubanos were most welcoming and helpful. I felt very safe walking about even

The smell of roasted pork fills the air.

when alone. Yes, there were the jineteros, trying to sell illegal cigars or broker taxis and restaurants. They accepted “no, gracias” graciously and did not follow me up the street as has happened in other Caribbean and some European countries. A common opening line was “Where are you from?” While some asking that were indeed hucksters, others just genuinely wanted to know. Often, after telling them where I was from, I received replies such as “Ah, Florida” or “My (pick any relative) lives in Hialeah.”

Having lived lives of resignation and making do, there now seems to be a sense of hope among many people we met. Obviously, we interacted with only a select population who are exposed to the tourism industry, but at least among them there seems to be “possibilities,” a word that someone told me was erased from their vocabularies in the hard economic times of the 1990s. As another person told me, “We don’t know where we are going, but we are happy we are going. Perhaps we will have some room to breathe.”