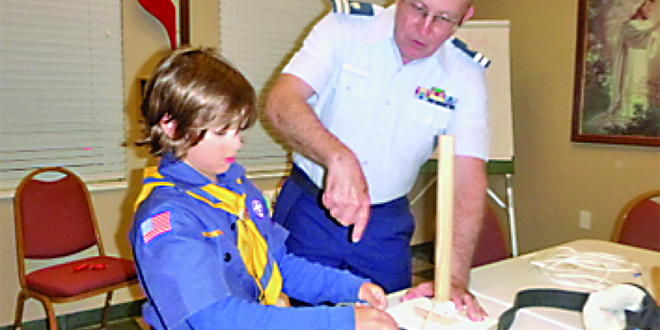 Bartlett displayed several different sized life jackets and demonstrated to the scouts the importance of ensuring that the life jacket you wear fits properly. Bartlett also told his young audience that they should always wear a life jacket while boating. He emphasized this by relating the Collier County motto used at the Loaner Life Jacket Stations: “Life Jackets Float, Kids Don’t.” The scouts were also encouraged to ask an adult when they board a boat for their life jacket, and to put it on immediately.

By utilizing a mock-up boat console, which included a marine radio, Bartlett conveyed the importance of knowing how to use that radio in the event of an emergency. The scouts certainly learned the lessons taught at the “YMCA Water-Wise” program, as they knew the US Coast Guard emergency marine channel is Channel 16. They also knew the “magic” words: “Mayday! Mayday! Mayday!” when notifying the Coast Guard that they were reporting an emergency. Bartlett then had several scouts perform the mayday drill and showed them how the Coast Guard would respond to their call. Bartlett also briefed the scouts on the use of the digital select calling (DSC) button on a marine radio to automatically notify the Coast Guard and other boaters of their emergency.

Bartlett concluded his demonstration by showing the scouts how to tie several simple knots and gave them the opportunity to try their hand at tying a hitch knot, which could be used to attach a fender to a boat rail, as well as the actions needed to secure a boat to the dock using a cleat.

For further information and schedules for upcoming classes, please contact Joe Riccio at flotilla95fsope@gmail.com. For a complimentary vessel examination, contact John Moyer at Jmoyer1528@aol.com. Inquiries about joining the Auxiliary or other programs offered, contact Flotilla 95 at 239-394-5911 or www.USCGAuxMarco.org.