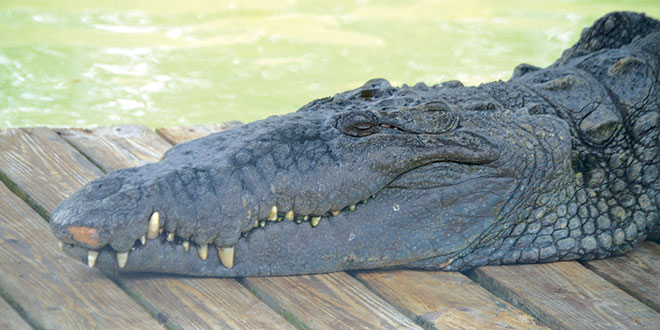 You can clearly see the 4th tooth on the lower jaw. This is an easy way to tell a croc from a gator. Photo taken at Wooten’s Nature Preserve.

Crocodiles and alligators….we’ve got both species on, or very near to, Marco Island. Although they look a lot alike, they are very, very different. Alligators are found primarily in freshwater habitats, and crocodiles are found primarily in saltwater habitats. The key word here is “primarily” because we do find both types of reptile in both types of water.

Crocs and gators belong to a group of reptiles called crocodilians, which are the largest of all living reptiles. There are 23 species native to the U.S., and the only place where both species coexist is South Florida. Not a whole lot of people realize that we do have crocs in the area, so let’s talk about them first.

American crocodiles here in our area are at the extreme northern range of their habitat. They are well acclimated to tropical and subtropical climates and can be found in Cuba, Jamaica, Southern and Central Mexico and as far south as Ecuador and Venezuela.

Although both species look very similar, the croc has more of a lizard-like shape and four short legs. Their front feet have five toes while the back feet only have four toes. One of the easiest ways to distinguish a croc is that the fourth tooth on both sides of the lower jaw is visible when the mouth is closed (Don’t get too close to inspect this…Take my word for it!). The narrow snout has a triangle shape; the ear drums are protected by moveable skin flaps; and the nostrils are at the end of the snout.

Male crocs can reach up to 20 feet in length but rarely exceed 14 feet in the wild. Adult females are about 10 feet long on average. They rely on external sources of heat to regulate their body temperature, like sitting in the sun or moving to warmer or cooler water sources. This means they are “ectothermic.” They can sometimes be seen basking in the sun with the mouth open which is just another way of regulating the body temp.

This open mouth position does not mean they are ready to eat you. Unlike some distant cousins in Africa or Australia, the American crocodile is very shy, and interaction with humans is very rare. Any animal can be dangerous if provoked, and please do keep an eye out for them in the coastal areas, in both brackish waters and salt water.

Females will be laying their eggs in April and will incubate them for about 85 days. Nests are constructed above the high tide marks and are covered by the female. The temperature of the egg determines the sex of the croc. Temps below 88 degrees produce mostly females while temps of

Two gators enjoy basking on a freshwater bank not too far from Marco Island. PHOTOS BY BOB MCCONVILLE

88 to 91 degrees will result in males. Hatchlings will leave the nest within just a few days to fend for themselves. The lucky ones can live to be 50-70 years old.

While this is the extreme northern boundary for crocs, it is the southernmost area to find the American alligator. This species can be found in many parts of the Southeastern U.S., including Georgia, Alabama, Mississippi, Louisiana and the Carolinas. Although they are seen primarily (there’s that word again) in freshwater swamps, marshes, rivers and lakes, they do have a tolerance for salinity (salt) and can be located in brackish waters just like crocs. They do not have the glands to secrete salt like crocs do, so their time spent in salty waters is limited.

Adult male gators can reach 13-15 feet while the female length will be more in the 10 foot range. The snout is broader than the croc and is more rounded. They will typically be darker in color than the croc. Waters ladened with algae will produce a dark green skin while tannic acid from overhanging trees can give the gator a darker color, almost black.

It is springtime, and courtship is taking place as we speak. Once a female reaches six feet in length, she is mature enough to lay eggs. Nests are fairly similar to that of a croc, but the incubation period is only 58 to 63 days. Eggs that incubate from 90 to 93 degrees produce males while those at 82 to 86 degrees will hatch as females. The temps in between will result in a mix of both boys and girls.

While the croc hatchlings are on their own within a few days, the juvenile gators will stay close to the mother for at least one year and sometimes as long as three years. They will create a social system with other hatchlings to create protection from predators during the early years. These youngsters grow rapidly, averaging more than one foot per year during the first four years.

So there we have it. Crocs and gators — members of the same species — are different in may ways but so similar in many more. Prehistoric creatures that have not changed a whole lot since man has been around. But, since man has been in this area, they have both been on the endangered or threatened species list. This is their backyard. We are just visitors. Let’s enjoy them, but let’s respect them also.