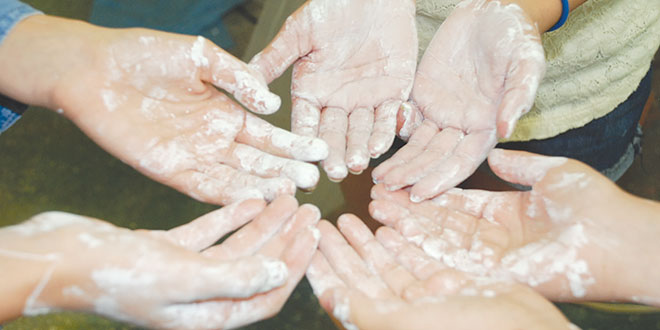 Messy hands are a work of art too.

The mind of a child is an amazingly creative place. Put the minds of nine children together, and you embark on a journey to a truly special place where Pegasus soar through the sky and three-headed creatures rule the land.

That is what art instructors Mary Kane, Linda Kropp and Robert Bransterator learned during the recent “Mythical Magical Creatures” art camp sponsored by the city of Marco Island and the Marco Island Center for the Arts. The three adults — all teach adult art classes as well at the Center — guided campers through a week-long tour of the whimsical and sometimes messy world of paper mache that ended with the two life-size models currently on display at the center.

Kropp, who is a former teacher, embraced working with the kids. “You get messy and have fun at the same time,” she said. “The kids are so much fun and sweet and 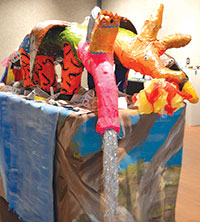 so creative. Their eyes all sparkle with new and creative ideas. It is so much fun to watch when the light bulb goes on in their minds.”

The kids began their week by discussing various mythical and magical creatures to brainstorm what type of beings they would create. As a class, they chose to create a Pegasus for its beauty and motion, but the second creature was another story. After talking about everything from a Phoenix to Sesame Street’s Mr. Snuffleupagus, the kids designed their own creature — a Hawk Dragiluvicos Flying Fire MerBra.

Part hawk, dragon, Phoenix, Snuffleupagus, mermaid and zebra, the creature flies and can live just about anywhere. On land, under water, extreme heat and cold, nothing bothers this three-headed beast. What does a a Hawk Dragiluvicos Flying Fire MerBra eat? Why, burgers and s’mores, of course.

Once the creatures were chosen and designed, out came the chicken wire, and Bransterator helped the

children create the forms. Next, four layers of paper mache were applied to the structures, and allowed to dry. Campers and instructors spent the last day painting and putting the finishing touches on the creatures.

The final masterpieces will be part of the “Youth Summer Arts Reception” at the Center on July 25 at 5:30 PM. This show will feature artwork from all of the art camps held at the Center this summer, including “Play with Clay,” “Acrylic Collage,” Creating Art with Nature,” iPhone Photography,” “Strut Your Stuff” and “Make and Learn to Play Your Own Guitar.”

Kane, who is an artist-in-residence at the Center, has been thrilled with the artwork produced by the camps thus far this summer, and she is pleased to have been a part of the program. “I want to promote art for children,” she explained. “We need replacements for the future, and these kids are so innovative. They are a breath of fresh air.”