Courage to Cross the Finish Line 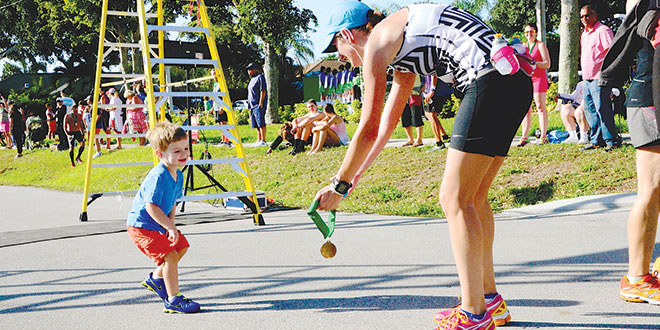 A runner in training congratulates his mom at the finish line. PHOTOS BY DEB EDGE

“The miracle isn’t that I finished. The miracle is that I had the courage to start.” John Bingham wrote that in his book “No Need for Speed: A Beginner’s Guide to the Joy of Running.” It is sentiment that perfectly sums up the feeling of running a half-marathon, the Marco Island Half-Marathon Bridge Run, to be specific.

Why would anyone voluntarily drag themselves out of bed on a cool Sunday morning in March to run a 13.2-mile scenic route of undulating pavement through Marco Island mangroves and residences, you ask? Simple, they had the courage to at least try.

In fact, more than 500 runners — me included — showed up at the Shops of Marco on March 16 courageously ready to run. Close to 300 took on the half-marathon challenge, which directed them up, over and back again across the Stan Gober Memorial Bridge by Goodland. The remaining runners laced up for the 5K.

Courage showed itself in all ages, shapes and sizes that morning from little girls under 10 years old to men in the 70s, and it hailed from all over North America as well. Of course, there was hometown courage — folks from Marco, Naples, Bonita Springs, Fort Myers, Estero, Miami and Key West, who have the chance to run in the 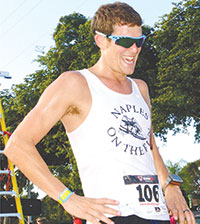 Josh Eaton of Estero was the fastest overall inhalf-marathon at 1:22:07

Courage poured from Josh Eaton and Marissa Hatcher when they crossed the finish line of the half-marathon as the fastest male and female runners, each winning $200 for the feat. From Estero, Eaton finished the race in 1:22:07, and Hatcher of Naples finished in 1:33:50. Courage was exemplified in the winners of the masters (40-49), grand masters (50-59) and senior grand masters (60+) divisions. Each took home $100.

Most of all, courage is defined by the family and friends of the woman to whom the Marco Bridge Run has been dedicated since it started six years ago. Carole Sbertoli was a fixture in the Marco Island community. A realtor, she was active in the community, participating in the Marco Island Area Association of Realtors, The Marco Island Women’s Club and the San Marco Catholic Church. Sbertoli passed suddenly in August 2007. The annual run raises funds for local entities whose missions focus on health, wellness and fitness.

This type of courage was seen most clearly in Julio Brancho from Pembroke Pines. Although he finished last of all racers with a time of 3:52:46, the 70+-year-old gentlemen finished — courageously.