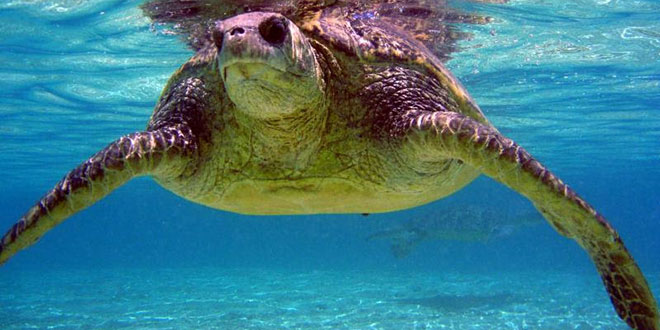 Two federal agencies today issued a final rule [link to FR] that will revise the listing for green sea turtles under the Endangered Species Act, including reclassifying turtles originating from two breeding populations from endangered to threatened status due to successful conservation efforts.

In addition, NOAA Fisheries and the U.S. Fish and Wildlife Service will divide the turtles globally into 11 distinct populations segments, allowing for tailored conservation approaches for each population. Three of the segments will be reclassified as endangered, and the rest as threatened. Green sea turtles have been listed as a threatened species, with the exception of the endangered breeding populations, since 1978.

“Successful conservation and management efforts developed in Florida and along the Pacific coast of Mexico are a roadmap for further recovery strategies of green turtle populations around the world,” said Eileen Sobeck, assistant NOAA administrator for fisheries. “Identifying distinct population segments across the green sea turtle’s range provides flexibility for managers to address specific challenges facing individual populations with a tailored approach. Ultimately, this will help us protect and conserve green sea turtles more efficiently and effectively, so that we can achieve our goal of recovering the species.”

Years of coordinated conservation efforts, including protection of nesting beaches, reduction of bycatch in fisheries, and prohibitions on the direct harvest of sea turtles, have led to increasing numbers of turtles nesting in Florida and along the Pacific coast of Mexico. NOAA Fisheries and the Fish and Wildlife Service have reclassified the status of the two segments that include those breeding populations as threatened rather than endangered.

“While threats remain for green sea turtles globally, the reclassification of green sea turtles in Florida and Mexico shows how ESA-inspired partnerships between the federal agencies, states, NGOs and even countries is making a real difference for some of our planet’s most imperiled species,” said Fish and Wildlife Service director Dan Ashe.

The agencies reviewed the green sea turtle’s global status to determine the new classifications, taking into account advances in genetic studies and telemetry and tagging data, as well as more than 900 public comments on the proposal. The reclassification into distinct population segments allows managers to take a more targeted approach to the specific threats facing different populations, while maintaining federal protections for all turtles.

Significant challenges remain to conserving and restoring green sea turtle populations around the world. Primary threats to green sea turtles include fisheries bycatch, habitat alteration, harvest of turtles and eggs, and disease. Development and rising seas from climate change are also leading to the loss of critical nesting beach habitat for green sea turtles. The agencies and partners continue to study green sea turtles to ensure that conservation and management decisions are driven by the best available science.

The U.S. Fish and Wildlife Service works with others to conserve, protect, and enhance fish, wildlife, plants, and their habitats for the continuing benefit of the American people. For more information, visit www.fws.gov, or connect with them through any of these social media channels: Facebook, Twitter, Flickr, YouTube.

NOAA’s mission is to understand and predict changes in the Earth’s environment, from the depths of the ocean to the surface of the sun, and to conserve and manage our coastal and marine resources. Join us on Twitter, Facebook, Instagram and our other social media channels.