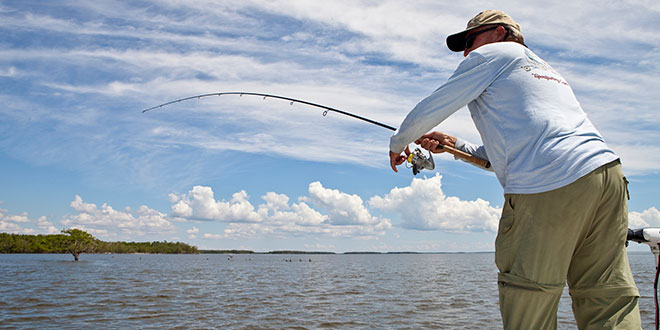 An angler participates in the 2013 RedSnook Tournament to benefit Conservancy of Southwest Florida water quality and gamefish research initiatives.

The 2014 RedSnook Catch and Release Charity Tournament will be held Oct. 24-26, and supports the water quality protection and gamefish research conducted by Conservancy of Southwest Florida.

New this year is the kayak fishing division, which has become increasingly popular in Southwest Florida for recreational fishing. Anglers will enjoy lower entry fees than in years past.  Also new this year is the honorary chair, Oliver White.  White is a famed salt water fly fisher and entrepreneur. Brands from Costa Sunglasses to G. Loomis have endorsed and partnered with Oliver to promote their products and message. Jungle Fish, a recent short film he starred in, won the Lightstays Conservation Award at this year’s Sundance Film Festival, while an upcoming book and a television series in-the-works demonstrate his capabilities as a leading authority on the sport.

The event is sponsored by Wayne A. Meland, of Morgan Stanley.  “The RedSnook Catch and Release Charity Tournament is a reminder of one of the treasures of our region – our waterways,” says Meland. “Without clean and abundant supplies of water, recreational and sport fishing would be a thing of the past.”

For a complete schedule of events, anglers and sponsors can register or learn more at www.conservancy.org/redsnook.

“We believe that blue-green algae, red tide and polluted waterways are everyday reminders that all is not well in this paradise we love,” said Conservancy President and CEO Rob Moher. “We recognize that the quality of our environment is linked to our economic viability, recreation and enjoyment of all this area has to offer.”

Over the years, the RedSnook Tournament has helped support the water quality protection work of the Conservancy of Southwest Florida, including:

• Working with decision-makers to communicate and to understand the importance of clean water to Southwest Florida’s overall economy and quality of life;

• Providing assistance and expertise to planned projects in order to minimize pollution – and in some cases actually enhance the quality of water that ultimately flows into local waterways;

• Creating the “Estuaries Report Card” which rates the condition of our region’s vital waters every five years including recommendations for improving overall water quality;

• Working to limit the amount of pollution from the north that enters Southwest Florida’s beautiful bays and estuaries;

• Helping to restore natural water flows to the Western Everglades and Ten Thousand Islands; and

Conservancy of Southwest Florida began 50 years ago when community leaders came together to defeat a proposed “Road to Nowhere” and spearheaded the acquisition and protection of Rookery Bay. The Conservancy is a not-for-profit grassroots organization focused on the critical environmental issues of the Southwest Florida region, including Glades, Hendry, Lee, Collier and Charlotte counties, with a mission to protect the region’s water, land and wildlife. Conservancy of Southwest Florida and its Nature Center are located in Naples, Fla. at 1495 Smith Preserve Way, south of the Naples Zoo off Goodlette-Frank Road.