State Representative Kathleen Passidomo took time from a busy schedule to speak to members of the Marco Island Association of Condominiums at a breakfast meeting in April. The Florida legislature has just wound up a session with several bills affecting condominiums offered by Rep. Passidomo getting through the House of Representatives, but running out of time in the Senate. She said that she intends to reintroduce all or part of those bills in the next legislative session.

In summarizing the relevant bills, Rep. Passidomo emphasized the importance of a bill that would accelerate foreclosure procedures. She has worked for some years with the Collier County Foreclosure Task Force on an effort to improve foreclosure procedures so that condominium associations would be freed from the morass of complicated lien actions that currently inhibit the ability to collect maintenance fees and other delinquencies. In 2008, with the real estate market in decline, the Naples area lost 14,000 jobs. Those workers lost their homes, and modification of mortgages did not work out, so the homes and condos were abandoned, and the consequences were staggering. Homes were looted, vandalized and used for drug and alcohol parties. Property went to seed. Condo 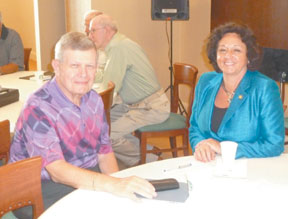 associations did not receive sufficient funds to maintain the property adequately.

The problem has been complicated by (a) banks and other lenders refusing to pay for delinquencies, and (b) the interweaving of federal and state law, i.e; the state has no control over much of the filing, and some delays in processing are virtually interminable. Rep. Passidomo is intent on improving and simplifying procedures clearly notifying lenders what they must file to avoid stalling. She also wants to clarify aspects of attorney fees on loan foreclosures.

Her bill passed the House with a bipartisan vote, and got through Senate committees, but did not reach the Senate floor. She asks for input from condo associations before the next session to help her next effort.

Rep. Passidomo also addressed the “Citizens Insurance Problem”. Citizens Insurance was created to fill the gap caused by the abandonment of Florida by major insurance companies regarding storm coverage. Citizens is taxpayer financed and, according to Rep. Passidomo, does not have rates properly set actuarially to allow it to survive. She has a plan designed to correct the problem, and needs to get more interaction with the public to develop mutual understanding and the benefit of citizen input.