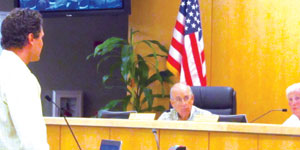 The Marco Island Code Enforcement Board met on Tuesday, February 12 at City Hall with Chairman Lou Prigge and members Phil Kostelnik, Rony Joel, Dawn Henderson, Richard Adams, and Debra Shanahan. Martin Roddy exchanged his seat on this board for one on the Planning Board. Sitting in for city attorney Burt Saunders was legal assistant, Daphnie Ricobene.

The board voted 5-1, Rony Joel disagreeing, to mitigate fines against a property at 1001 Valley Avenue for failing to connect to the sewer system. As the house has been purchased in a foreclosure sale, the new owner’s attorney, Mr. Goldstein appeared to ask for a reduction in fines as his client, an investment group, had not owned the house long enough to incur the charges. He was instructed to allow his clients 30 days to pay a reduced amount of $7,789 or the fine would revert to the previous amount of $68,200.

Beth Brown, real estate agent with Coldwell Banker and representing Bank of America, appeared on behalf of a property at 1563 Galleon Court, to ask for mitigation of fines accrued for failure to connect to the sewer system.

As the property is now in compliance and under contract for sale, the board voted unanimously to accept the reduced amount of $3,100 to be paid in 30 days, instead of accumulated fines of $71,250 in order to facilitate closing.

A property at 428 Nassau Court had an outstanding fine for failure to install a pool barrier, creating a public safety situation 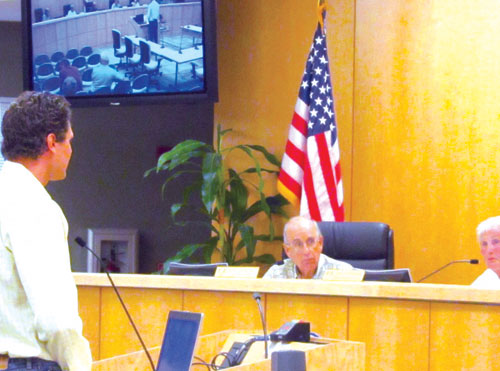 for 14 days. Michael Heiderman, manager of Florida Foreclosure 2, an investment group that purchases foreclosed properties, appeared to ask for a lower fine, stating that his company has purchased and refurbished approximately 19 Marco Island properties for improvement and re-sale. The board voted unanimously to accept $1,921.03 which represents $10/day since the company has owned the property (14 days), $140 in fines; $150 administration costs, and $1,631.03 in hard costs to the city.

Neighbors of Marco Marine Construction 110 S. Barfield Drive/1757 San Marco Road complained that from their front door on S. Bahama Avenue they face the company’s illegal storage of equipment, old sea walls, and overnight parking of a company truck in a C3 zoned area. Liz Carr, Code Compliance Supervisor said she had given the company a deadline of January 10 but as of the afternoon of the meeting, nothing had been done. She recommended the board issue a ‘drop dead date’ for compliance.

Donald Ricci, company owner appeared before the board and agreed to bring the property into compliance by February 24. Although it was generally agreed, Ricci’s company isn’t the only one not complying and parking a company truck on the property overnight, Carr said that there are far too many to check on the island. The board agreed to drop all fines and Carr said she would recommend waiving the costs if Ricci complied by the given date.

The next meeting of the Marco Island Code Board will be held on Tuesday, March 12 at 3 p.m. at City Hall.