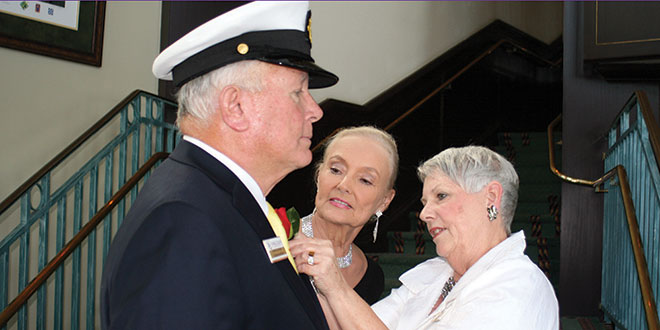 The 13th Annual Commodore’s Ball and Change of Watch ceremony held recently at the Marco Island Yacht Club was a show of class and nautical tradition. The event recognized past and present members of the Bridge, (club officers) and those who have contributed their time and talent to the club over the past 12 months.

Dick Irwin was sworn in as Commodore for 2015, promising to uphold the club’s mission statement to “Provide an outstanding boating, social and dining environment that is friendly, comfortable, affordable and invites participation.” He replaces Commodore Robert DeFeo who ceremoniously lowered his burgee (flag), allowing Irwin to raise his.

Curtis) worked many, many hours for the benefit of our yacht club. We are pleased to have his widow Jane Curtis and their son, John, with us this evening.” A moment of silence in Curtis’ memory followed.

Awards included the “Sailing Fleet Leadership Award,” which was presented to Lois Dixon, and “Boat of the Year Award” went to Gary and Marsha Riss.