Come Wiz Me to Ze Casbah! 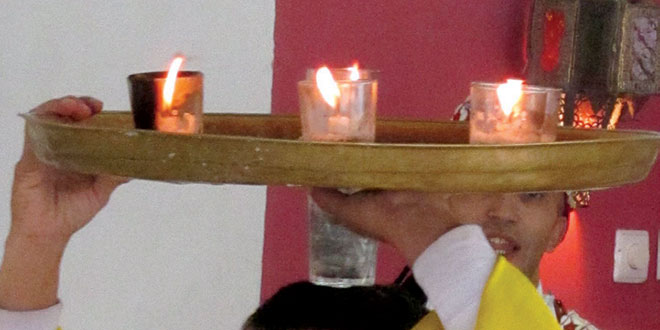 When we were invited to come to the kasbah/casbah on a recent trip that included a visit to Tangier, Morocco, we agreed to go, not sure what to expect. A little too old and wrinkled to worry about being kidnapped into the white slave trade, and not unrealistic enough to expect Bogie or Bergman in a Casablanca setting, we did however prepare by removing all jewelry, dressing modestly and leaving anything of value on the ship. Thus disarmed, we followed the guide toward the medina.

The sidewalks were filled with throngs of youngish, wildly enthusiastic young men all headed in one direction. Not wishing to be caught up in any public or political altercations, we were relieved to hear they were headed to a football game, and as we neared the stadium, the streets and roads were filled with police cars and tough-looking officers.

We continued down one snaking alley after another, lined with mostly shuttered shops as it was Sunday, until we reached the walls of the old walled city, or medina, that runs up the side of the incline to the kasbah. An uphill climb past a series of street merchants, attempting to flog everything from leather handbags to shiny but cheap-looking jewelry and in one case three packages of rather worn looking Wrigley’s Juicy Fruit gum, took us inside the city walls to more winding cobblestone streets with a wide variety of eastern bazaar-like shops on each side. Polite but curious vendors offered best deals, acceptance of euros or US funds, welcoming us inside. Somehow, we were able to resist, and flapping away the persistent flies, we tried to maintain a steady pace behind our guide, who seemed more determined to get us to some mysterious destination than to cater to our curiosity about the local wares.

Dripping from the high humidity and beginning to wonder if this were an exercise in futility, we were drawn toward one dim alley that suddenly produced drum beats that became louder and more insistent with our approach. Our guide turned in at a doorway 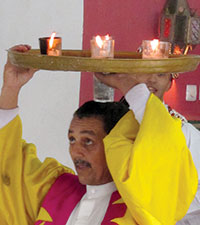 flanked by three lavishly dressed drummers, all decked out in gold trimmed outfits and thumping away at their instruments with gusto. At the bottom of a steep flight of stairs was a fellow, reminiscent of Goya’s self-portrait of Candle Hat(the artist working at night with candles around the brim of his hat), only this was a dancer with a tray of candles in glass tumblers balanced on his head.

We certainly didn’t expect the scene at the top of the stairs: It was a large, spotless airy room with about 50 chairs, a stage and a long table containing three varieties of sweets and hot mint tea. Wide-open picture windows afforded a view of the ocean, our ship in the distance and a much-needed breeze.

Within a few minutes the street drummers appeared to entertain us with their folklore talent, one of them performing his version of a dance that was suspended in time between whirling dervish and rap. He encouraged the audience to join him in a Moroccan conga line. Then, a veiled woman appeared and began to shimmy and shake like my sister Kate, only when she flung off her veils she incongruously looked more like Kate’s grandma! Undeterred, she wriggled and writhed her jiggling body around the room, conning two from the audience to join her. The candle hat man also appeared to show off several versions of his shaky dance done while balancing the rather battered tray of lit candles in glasses on his head. His infectious smile and energy somewhat compensated for his level of talent.

With gusto, the audience responded to the enthusiasm of the performers rather than their ability (or lack of it). The highlight for some was obviously one woman accidentally locking herself in the ladies restroom and the panic that resulted as she was easily convinced the slave traders were on their way.

The return walk was a repeat of cobblestones, dark alleys, flies and annoying street vendors accompanied by the occasional large cat.

The next time someone suggestively wiggles his eyebrows and whispers, “Come wiz me to ze casbah,” I hope he isn’t too disappointed to hear, “Been there, done that!”