A Photojournalist’s Journey With Mother Teresa

San Marco Catholic Church’s new faith based group, Marco Faith and Wine, sponsored an evening with Linda Schaefer on February sixth for women of all faiths. Linda is a photojournalist who was granted full access to the work of the Missionaries of Charity, the order of nuns founded by Mother Teresa in Calcutta, India in 1950.

Linda is on the faculty of East Central University in Ada, Oklahoma and has had an extensive career as a photojournalist. She has won a number of awards for her work including her book, Come And See.

Linda ?rst met Mother Teresa in 1995 in the Atlanta, Georgia airport. She was on assignment, free lancing for the Archdiocese of Atlanta and had a conversation with Mother Teresa. When she asked about her work, Mother Teresa said. “Come see.” Linda found herself caught up with this tiny woman who was beckoning her to a new life experience.

Linda arranged a trip to Calcutta although she carried with her concern about the health of her father and sorrow for the death of her husband. On the ?ight to India, she met a well dressed man of Indian descent who spoke to her about the death of her husband, reassured her about her father’s health and predicted a much longer stay in India than Linda had expected. She never met the gentleman before and yet he knew much about her. A Heavenly visit? I think so.

Linda worked as a volunteer in one of the houses for the sick and dying assisting the Sisters with the most menial tasks. She was 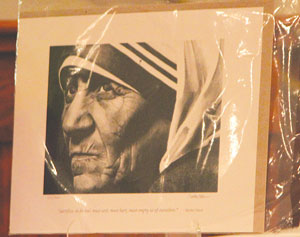 moved by the devotion of the Sisters and Mother Teresa, who worked the same long hours as the younger nuns. Linda was happy to serve the ill and dying but also wanted to use her professional skills to document the work of these devout, amazing, gentle women.

One day she had a conversation with Mother Teresa who preferred that Linda remain a volunteer. However, Mother listened to her request and concluded the conversation. “You go to your room and pray. I will go to my room and pray.”

The next morning Linda was granted permission to document the lives of the Sisters, including Mother Teresa, the routine of their daily lives and their work among the poor and the sick.

She was granted full access to the houses for the sick and dying, the schools established for the children of the slums, the orphanages, not only in India, but also in many countries where the Missionaries of Charity have been welcomed.

Linda was impressed with the simplicity of Mother’s daily life. Her day consisted of early rising, an hour and a half of prayer, a simple breakfast, and then work in the house of the sick or with the children. A modest mid day meal, rest, prayer and back to work. Mother found time every day for at least four hours of prayer.

Her Sisters, all well younger than Mother Teresa, lived the same routine. The stamina and humility of Mother was their model for no one worked more joyfully and tirelessly than this tiny woman now in her 80’s.

A singular quality of Mother impressed Linda. Never once did Mother ask her what religion she practiced. Mother exempli?ed a 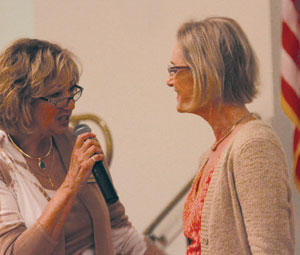 complete openness to all people as one family. Linda has become a Catholic since her time with Mother Teresa and her Sisters.

Mother Teresa’s life of service to the poor was troubled for many years by a spiritual darkness. She had doubts about how well she ful?lled her vocation and lost her connection to God. Her devotion to God’s poorest of the poor never wavered, however, and she privately endured her struggle of faith.

There is no question how the world remembers Mother Teresa. She is admired all over the world, even in Russia and the Middle East, where her order has founded many care facilities for the poor. The ongoing support for her open-air schools, houses for the dying, orphanages, even a leper colony pay tribute to this holy woman.

Six years after her death, Mother Teresa was beati?ed by Pope John Paul, a step toward canonization as a Saint of the Roman Catholic Church.

Linda’s journey with Blessed Teresa has continued even after her death. She was present at her Beati?cation in 2003. She has written a book about her, Come And See, and is working on her next book, The Prophetess Of Our Times.

Marco Faith and Wine, led by Cindy Henning of San Marco Catholic Church, “offers women a casual venue to be inspired while sharing faith, wine and friendship.” Women of all faiths are invited to join and share their faith in a comfortable, welcoming atmosphere.

The next event sponsored by Faith and Wine will be on March 11 at San Marco Parish Center. “Hope for Haiti-Help for the Children.”