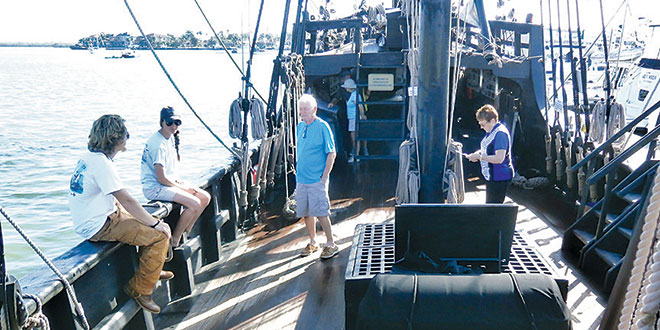 Stepping aboard the Columbus ships as they were docked at Rose Marina in Marco Island on the weekend of February 28, my mind drifted back to what it must have been like. The wind filling the sails as the bow broke deep through the waves of an open ocean. Dolphins streaking keeping pace with the ship and the sun making me squint as I survey the rigging above me. How glorious it must have… Whoa…wait a minute! That was the fantasy. The reality was much different.

In truth, these ships are not large; Nina is 65 feet and Pinta is 85 feet long. In their glory days, a crew averaging 25 in number plus provisions, live stock and gear, these ships were packed tight and the work strenuous and long. I have a hard time imaging 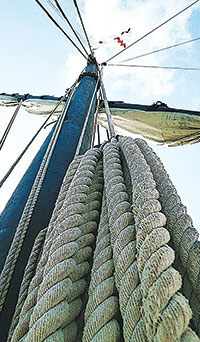 such tight quarters. Combine that with the fact that you really don’t know where you are going, or when you will get there, the stress level must have been pretty extreme.

The accomplishments of these vessels and their crew is now the stuff of history. And half a millennium later, these ships still inspire those with adventure in their blood, to sail the seas. This time however, the purpose is to educate and share the glory these ships experienced with people around the country. Stop reading now if you are looking for a history lesson. This is a different perspective.

Mallory Delapp is a modern day crew member from Michigan. She signed up seven months ago after seeing a ‘crew wanted’ poster. “I wanted some adventure,” she says while sitting on the gunwale of the Nina. “Luckily, sailing experience was not required and they took me on. 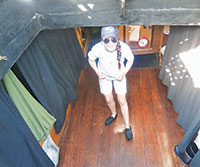 Crew member Mallory shows off the living quarters. Cramped now, imagine 25 sailors in there for 7 months.

And I really have had quite an adventure.”

Mallory showed me what it was like below deck. Bunk beds line one side of the bulkhead. They are small with only a curtain for privacy, across the aisle, storage for personal gear and provisions. I was getting a bit claustrophobic at this point and actually got dizzy thinking of 25 crew members living in this space back in the day.

Admiral Pearce Risley (title is honorific), has been with the crew for about six months. He hails from Indiana and also yearned for some adventure. “You are always learning,” he says. He points to the organized chaos of ropes and other rigging, “Whether it is about sailing, or about the history these ships experienced, every day is new and it’s fun putting in at all our ports of call.”

After talking with yet another crew member, Nikalos Gus Kodros, 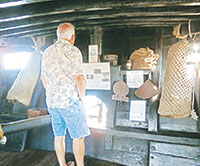 The ships are museums complete with exhibits and ship store.

First Mate/Reserve Captain, from St. Louis, I began to wonder why so many people from the Midwest were on an ocean going ship. He laughs and replies, “I guess they appreciate all us corn-fed, hard-working souls.”

These ships are traveling museums giving the general public a chance to learn, feel and hear what it was like in the heady days of sailing. These are the ships that went where no one else had gone. They opened the door on a whole new world, a world that would become our home.

It is quite an experience to stand at the prow of these ships and, with a little imagination, feel the spirit that drove them. Hopefully, it stirs the soul a bit and awakens the explorer in each of us.

After three days in Marco Island, the ships head to Fort Myers. For more information and to track their ports of call go to: www.thenina.com.