The WW II B -17 “Flying Fortress” flying over the water. PHOTO CREDIT – MUSEUMOFFLIGHT.ORG

During World War II, the U.S. Army Air Corps constructed training bases in Florida to try to fill the tremendous need for pilots and gunnery crews to fight in Europe. By the end of the war a total of 54 bases had been constructed with thousands of military men and women introduced to the Sunshine State for the first time. Buckingham Army Air Field, just east of Ft. Myers, opened in 1943 as home to the 2117th AAF Base Unit – a Flexible Gunnery Training Squadron. The air field was built for heavy bombers like the B-17, better known as the “Flying Fortress.” Buckingham’s commanding officer General E.B. Lyon stated the goals: “Operate attack missions on Buckingham’s B-17s in the development of student gunners of that base and to teach our own pilots the functions of combat training.”

An airfield was built in Naples to be used by fighter planes flying out to simulate attacks on the Flying Fortresses coming out of Buckingham. Limestone was planned to be the base for the Naples runways but was too expensive at the time, so shell from the Calusa Indian mounds of Goodland was purchased from the Pettits and trucked to the location of the current Naples Airport to be mixed with asphalt and native materials into a 6 inch sub-base with a two inch layer of asphaltic concrete added over the top. After 2 years, the Naples Army Air Field was completed on December 23, 1943, at a cost to the government of $1.5 million dollars.

Young men, who had graduated from Buckingham’s gunnery school, but were inexperienced in combat or aerial gunnery, were sent up in the air with pilots who, themselves, had just completed flight training. Two planes were typically used: an advanced trainer, the AT-6 (nicknamed the “Texan”) which held a pilot in the front cockpit and a gunner in the rear. The Texan’s 550 hp Pratt & Whitney engine could reach speeds of 205 mph and it could cruise for 170 miles at 5,000 feet, while the other aircraft typically used was the B-17 (“Flying Fortress”) a four engine bomber painted in olive drab that usually carried a crew of 8-10. Fully loaded the B-17 weighed up to 72,000 lbs and, as a result, could only make emergency landings at the Naples air field.

During the six weeks of training in SW Florida, each pilot was given 3,500 rounds of ammunition to be used, part of which was for the 15 hours of simulated combat attacks on the Flying Fortresses. They would fire 100 rounds from a fixed wing gun at a towed target while flying at 150 mph, the target was a mesh rectangle, 4’ x 20’, covered with colored grease that when hit stained the target.

Being assigned to a Florida air base was not “light duty” – within the first 20 months after the opening of the Naples field, 20 separate crashes or incidents occurred and over 15 officers lost their lives. During the year 1944, when pilots were flying B-26 medium bombers out of Tampa’s MacDill Air Base, the death rate for simulated combat pilots from DeLand, Vero Beach and Ft. Lauderdale was one per day – prompting the sad phrase: “One -a-day in Tampa Bay.”

The practice range for Southwest Florida was established off the coast from Naples to Cape Romano, an area where fighter planes would dive bomb the B- 17s shooting at the mesh targets pulled behind them. As a safety measure, the Army established an Air Rescue Service, leasing the Old Marco Inn and grounds as their headquarters during the war. Army barracks were constructed and a large 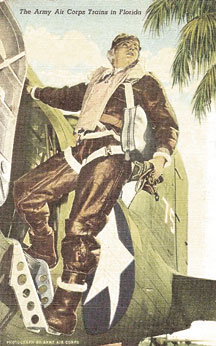 Army pier built into the Marco River for their five vessels: an 83’, a 63’, and three 22 footers, all known as “Crash Boats.” In addition the military built themselves a source of water in the center of the Island (a well that is now located in one of the lakes at the Island County Club).

Thelma Heath, a school teacher on Marco Island, recalled that many of her students were at a birthday party on Saturday, January 22, 1944 when they saw planes going over. The students stopped and looked north, watching as a fighter plane never came out of its dive, crashing into one of the wings of the Flying Fortress, causing it to also drop from the sky. The last verbal contact of the Flying Fortress with the Naples control tower had been to obtain permission to proceed northward along the coast back to Buckingham, with only one more attack on it by an AT-6 to complete the day. That AT– 6 was piloted by Lieutenant Joseph O’Flaherty flying alone doing figure eights when, “Suddenly, something went terribly wrong. The two planes collided mid-air and sent pieces of planes exploding in a macabre pattern of grease, metal and fuel. The noise was deafening.”1 Lt. O’Flaherty was able to jump from his plane and parachute to safety, while the B-17 with a full crew of 10 broke apart and fell into the Gulf of Mexico killing all aboard.

The crash boats from Marco responded and were able to rescue Lt. O’Flaherty, who was taken to the hospital and soon recovered. But, after the first day of searching, only two additional bodies were recovered from the B-17, leaving both the air base at Buckingham, where the B-17 was stationed and the Naples air base, where Lt. O’Flaherty was stationed at a loss to understand the cause of the crash. It took much longer for the Army to retrieve the rest of the bodies and the crash debris.

Lt. O’Flaherty’s luck did not hold out that much longer; about six weeks later on March 4, 1944, he was the bombardier on board an AT-6 piloted by Lt. Devenport on a ground attack mission. As they dived down, their plane burst into flames and both were killed. Lieutenant Bornmann was assigned the duty of accompanying the body of Lt. O’Flaherty back to New York. Joseph O’Flaherty is listed on the New York Fire Department’s Honor Roll as a “Fireman, Ladder 105” having died “Mar 4, 1944, Naples, Fla, Plane Crash, Killed in Action, WWII”.

In the 1960s, Henry Lowe from Marco Island spotted an engine and a propeller from one of the two airplanes that crashed in 1944 off the coast of southern Key Island (Keewaydin) due west of Little Marco. Today this is the area of Hurricane Pass and one of the busiest beaches on weekends in Collier County. One is left to wonder how many, if any, of the beach partiers realize that they are standing near the location where ten airmen bravely died in 1944: the single greatest loss of life of any accident in Collier County’s history? As we celebrate Veteran’s Day we need to remember the thousands of military who served in Florida during WWII both in training and in surveillance of our coastline.

1Information for this article came from “Pilots, Pinballs & Politics” by Nancy B. Fessenden, PhD. a book highly recommended to those with interest in the history of the Naples Municipal Airport, as well as from interviews with pioneers done by Virginia Carlin in her book “I Remember Marco” as well as discussions of the author with Henry Lowe, Dick Bergmann and Bill Blair.