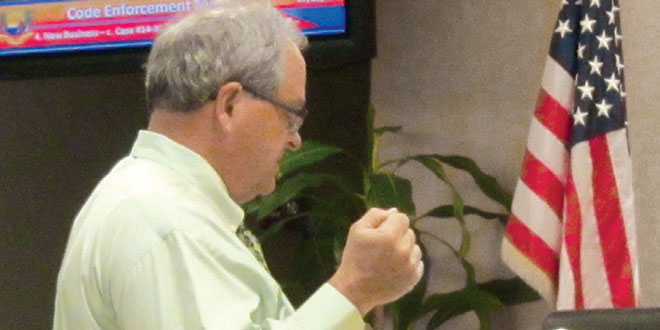 Attorney Craig Woodward argued on behalf of two clients at the Code Enforcement meeting: Matt Walthour of Island Bike Ship and Michael and Janet Grella who own a vacant lot at 1221 Osprey Court.

On Tuesday, Aug. 12, at 1 PM at City Hall, the Code Enforcement Board will meet in a workshop with City Council to discuss replacement of the board with a magistrate to hear cases. Meanwhile the July meeting, postponed for several weeks, covered a variety of cases.

At the July 29 meeting, respondent Marlene Church attempted to use the board’s postponement of the meeting to request yet another continuance for her defense against the city’s charge of illegally operating a bed and breakfast establishment at 727 Fairlawn Court. This area is zoned only for single-family dwellings.

The continuance was denied with a 3-2 vote, Rony Joel and Debra Shanahan dissenting.

Code Officer Liz Carr said she had cited the property as early as February of this year, and board members questioned why Church continued to advertise and to rent the property to clients after she had been made aware of its illegal use.

Board member Ray McChesney noted that Church herself had been made aware of the situation, and she, not just her attorney, had been told to cease.

Board member Paul Kampmeyer pointed out that as recently as two weeks previously the property was still being advertised on the Internet with clients promising to return in the future, although Church claimed the house was being sold. He questioned why 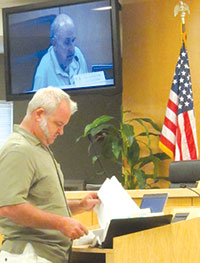 Matt Walthour, owner of Island Bike Shop has been in business for 15 years. He will need a letter of permission from RiversideCondominium allowing for screened storage. PHOTOS BY CAROL GLASSMAN

Church, if she understood the violation, continued to operate.

Church said her attorney was out of the country, and she did not feel comfortable responding to questions. City attorney Burt Saunders reiterated that the city codes clearly state that “transient lodging is not allowed in a single-family district.”

The board voted unanimously that Church cease all business activity within 10 days or face fines of $100 per day.

In a ’turnabout’ event, Island Bike Shop owner Matt Walthour found himself in a precarious position when he reported the illegal sale of bicycles without a license from a neighboring business. After this was handled, Code Officer Liz Carr then cited Walthour’s business for “Illegal Merchandise Storage and Display.” Although Walthour’s attorney Craig Woodward argued long and hard with Carr that there was no violation, no threat to public safety, and that his client had been doing business legally for 15 years in C-5 zoning that way, Carr insisted that merchandise be kept clear of the walkway and doorway to the shop. She also pointed out that bicycles hanging on the outside rear wall of the shop should be removed, over Woodward’s protests that it was not an illegal act, unless Walthour produce a letter from the adjacent Riverside Condominium building allowing storage in that area and enabling it to be screened. 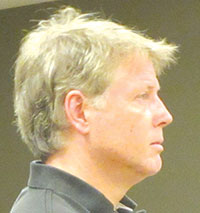 voted 4-1, McChesney dissenting, to dismiss the first charge with the assurance that the entrance and walkway would respect the code and Americans With Disabilities Act with respect to ample clearance. They voted unanimously to acquire a letter of permission from Riverside Condominiums to allow screened storage in the rear of the building.

William Wiley, owner of a property at 120 Greenview Street, was cited for renovating without a permit. Wiley, a new owner of the property said he didn’t think he needed a permit to replace the railing and the second floor landing. He planned to complete his drawings and apply for a permit during the week. Failure to do so will result in fines of $150 per day until compliance.

Michael and Janet Grella, owners of a property at 1221 Osprey Court, were represented by attorney Woodward, trying to mitigate accrued fines of $172,600 plus hard costs to the city for maintenance of their lot.

The violation began when the seawall, since replaced, began to disintegrate and the lot fell into disrepair with tall weeds. Although the owners claimed they didn’t know any of this as they had not visited the island in 10 years, Code Office Carr had signed certified mail receipts from various notifications the city had sent.

Realtor Barry Webb appeared on behalf of his client who he 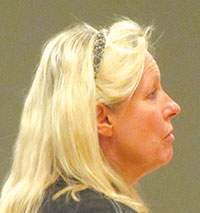 Marlene Church, owner and operator of a bed and breakfast establishment at 727 Fairlawn Court for many years, was ordered to cease business within 10 days.

claimed was a very reasonable and compliant person. Grella apparently thought during all these years his neighbor was mowing the lawn for him.

City Environmental Specialist Nancy Richie suggested reducing the fines to $5,000 per month. With the property listed at $500,000, fines of $32,480 plus all hard costs accumulated might be more reasonable, she said.

Woodward and Webb agreed to the board’s order and warning that if payment isn’t received within 30 days the original fines of the board would stand.

Code Officer Carr reported on some troublesome properties that remain on the board’s list, namely 1809 Sheffield, 643 Bamboo and 923 N Barfield. All of these properties are uninhabited, boarded up and in the case of 923 N Barfield condemned and awaiting demolition. City Attorney Saunders noted that in some cases until clear ownership is declared, nothing can be done.

Interim Chairman Phil Kostelnik commented that some of these properties have been in disrepair for more than five years and neighbors are forced to look at them. Fines accrue in some cases, more than the value of the house, he said, and then they are mitigated to remove the lien.

Carr pointed out that once foreclosure proceedings begin and estoppel is granted, all city liens are voided.

Pending the future of the Code Enforcement Board, Kostelnik has been appointed interim chairman and Paul Kampmeyer vice chairman.