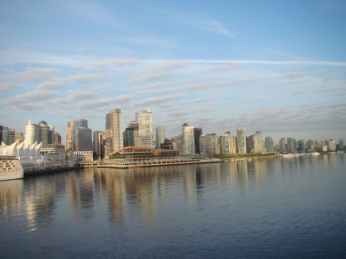 The sight of the port of Vancouver, British Columbia upon departure and arrival is a striking cityscape

There are some excellent deals available for cruises these days, and now is the time to sign up, especially if you are considering an Alaskan cruise in 2010. Experts advise that weather and wildlife sightings are best between the end of June to mid-July. There is quite variety of cruises and Alaskan destinations available, while the following outlines a seven-day Alaska Inside Passage cruise that left from Vancouver, BC aboard the ms Volendam of the Holland America Line. This is a ‘beginners’ cruise, a sampling of life aboard ship and a few of the ports you might see. Right now, Holland America is offering sizable discounts for some of their more luxurious suites on cruises to Alaska between May 12 and September 15, 2010.

Vancouver has an ultra-modern port and the ease of checking in made it obvious they had done it a few (thousand) times. Passengers are sent coded luggage tags in advance and before one has time to worry about it, bags are looked after and everyone is ushered onto the ship using the coded cards that are to be constant companions for the next week. As cabins are usually not quite ready, people are sent to Deck 8 to sit poolside and partake of a splendid buffet that caters to everyone’s eating perversion, from the simplest to the most exotic Asian concoctions. There are many humorous stories about 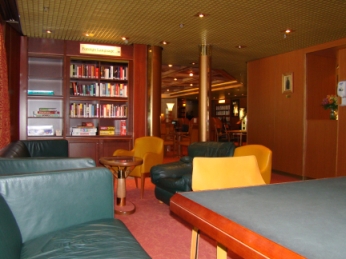 the ship’s cargo weighing more at the end of a cruise, and that must refer to human cargo! Pack loose clothing!

Fully stuffed, folks sit and wait for the announcement to go to their cabins. This comes around 2 p.m. A verandah cabin is delightful: a huge, comfortable bed, sofa, desk and chairs, and like the rest of the ship, the décor as well as the staff is Indonesian. The theme is floral with fresh flowers and orchids everywhere and a plate of chocolate strawberries as a welcome aboard.

As soon as people unpack, there is the announcement of a compulsory fire drill over the loudspeaker. Decked out in unfashionable red lifesaving jackets, bulky penguin-like people waddle their way to the correct station on deck and stand sweating while staff checks to make sure every single person is present.

As promised, the gangplank is lifted at 4 p.m. and at 5 sharp, with a loud honk, the ship glides out of the harbor. After a few days of cloudy, rainy sky in Vancouver, the weather suddenly clears as the Volendam heads up the coast. It is delightful standing on a verandah and watching the scenery slip by. In fact, it is so smooth it doesn’t feel as if the ship is moving at all.

One cabin steward (wife for a week) named Joi, introduces himself and by 6 p.m. dinner is ready.

Seating is not fixed: 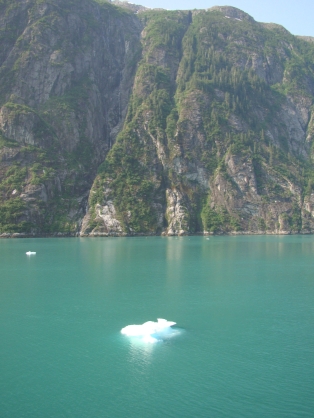 you may have different people at your dining table each day. The menu promises no one will go hungry, and some adjustments can be made for dietary preferences as well as food intolerances.

After dinner there are many entertainment choices available from a mini-tour of the ship, to casino gambling, shopping, night club shows, movies, or simply bar hopping. A good dose of sea air drives many to bed early.

The next morning dawns to a grey, gloomy sky and chilly weather. Following an enormous buffet breakfast, no one seems bored as there are many options such as bridge games, a fitness room, library, jigsaw puzzles, or good old-fashioned people watching and sightseeing.

It seems that as soon as the breakfast buffet is cleared, lunch is ready. The meals are entertainment as well with demonstrations of ice sculpture and wine tastings. Most people seem to favor buffet-style lunches as well.

Dinner is listed as ‘formal’, but one may find that this is open to loose interpretation aboard every ship. On the Volendam you may dress up only to discover ‘formal’ has many faces and had you bothered with tux and gown you would be sorely out of place with those who show up in ‘country club casual’: men with jackets and no ties.

On Friday morning, clocks are set back another hour and everyone is prepared for views of Tracy Arm, the Fiords, and Juneau. By 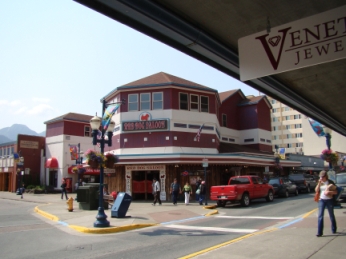 Red Dog Saloon – Juneau, Alaska – an attempt to preserve the favor of the Gold Rush Days

7 a.m. most people are up and outside on one deck or another, staring at the foggy coastline and getting colder by the minute. Slowly hats, gloves, scarves, and whatever is needed to keep warm come into play. The icy scenery is incredible when the fog finally clears and when most of it has been seen, those on deck head inside for breakfast and hot tea. Afterwards, many sit outside on the aft deck and watching some of the wildlife – seals and Orcas – as the ship heads to Juneau. There is constant commentary throughout the ship so that passengers will not miss anything. Whenever the captain announces, “Whale on the starboard side!” one almost expects the ship to tip over as eager watchers tear across the deck in time to see a little splash as the tail disappears.

There’s a first class view as the ship docks in Juneau’s harbor. People are walking the length of the main street in shirtsleeves, enjoying the old buildings and trying to picture frontier days in Alaska. Here is where one can take extra tours to see the glaciers or just a city bus to Mildenhall Glacier.

As most port towns and cities, Juneau is dependent upon tourism. The streets are lined with jewelry and souvenir shops, with most items ‘Made in China’. 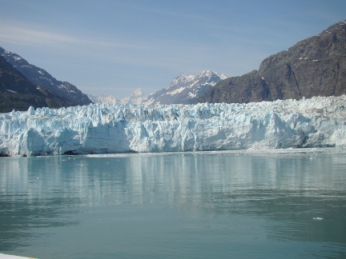 One of the magnificent ice glaciers in Glacier Bay, Glacier National Park — the height of a 30-storey building it drops tons of ice every hour as it ‘calves’ into the water beside it.

Saturday at Skagway begins with the sight of a huge boulder plastered with ships’ stickers outside on the dock: Skagway railway harbor. Many passengers disembark here to take a train and tour inner Alaska and end up in Anchorage, from where they can fly home, while others board the ship after seeing Alaska’s interior.

Although it may go without saying, while aboard a ship one is aware of seeing only the surface of Alaska – a taste that might hopefully entice visitors to return and enjoy a more thorough ‘meal’.

On Sunday, surrounded by misty cliffs, the ship moves slowly into Glacier National Park. This is what most people have been waiting to see — the idealistic Alaska of ice, snow, glaciers, total stillness: the scenery is simply spectacular, giving the feeling of being on a ski slope one minute and on the moon the next. Park rangers board the ship and describe each view. Dressed warmly, passengers make their way outside to the bow of the ship where the loudest sound is the clicking of cameras. As the day becomes warmer the mist clears and being quite close to the shore, one can see the glacier formation and the piles of snow. Then suddenly ice ‘calves’ in one area, falling in huge 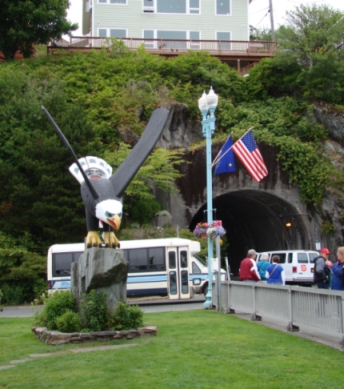 chunks off the cliff structure and into the water with a roar that sounds like thunder.

Scenery during lunch is stunning, although most people almost resent any time spent inside and away from the action. The ship merely stays in one place, revolving in a 360-degree turn so that there is a continuous slide show of the most majestic peaks and glaciers. Of course they look large, but to learn they are 30 storeys high and to translate that into real terms, is mind boggling. By 3 p.m. there is a sea lion and sea otter showing on deck. There are also Orcas sounding and spouting around the area. Almost reluctantly, the ship finally retraces its way out of Glacier Bay.

The next city is Ketchikan. Its approach feels ‘familiar’, looking rather like woodsy northern cottage country. The shoreline is dotted with houses and it seems more populated than previous towns and cities with seaplanes as numerous as mosquitoes, taking off and landing every few minutes.

The first stop in town could be to the Tourist Information booth on the docks for advice and maps.The people are very friendly, describing Ketchikan’s moderate, temperate climate where snow is infrequent and melts quickly. However, they have many FEET of rain each year. Also, they like living in Alaska as there are many perks for seniors such as property tax breaks, free car ownership licenses, free fishing 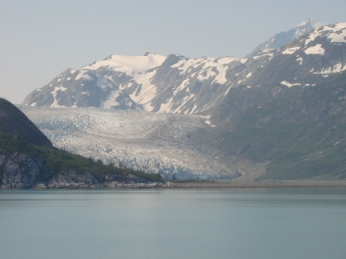 We came to see glaciers, and this one is huge – bringing tons of earth and snowy ice into the water. If you don’t believe in global warming, you might try to explain why this bay was once frozen land.

Tourists may take a free bus to the totem pole museum and fish hatchery. The museum is quite small although it contains a lot of information and artifacts.

The next day is grey and dreary outside, but as the trip is drawing to a close, major packing has to be done. There is a good Alaskan ‘lumberjack’ lunch available around the pool with different kinds of salmon. In usual shipboard style, one is just digesting lunch when dinner is being considered — and in this case, a special early dinner is planned by the staff so appetites must be summoned quickly.

The meal is ‘performed’ by the staff dancing ballet-style with serviettes and food, juggling salad ingredients and presenting a grand finale of Baked Alaska with glow-sticks.

Sailing alongside Vancouver Island with whales surfacing every so often is surprising to those who have never imagined such a huge expanse of mostly uninhabited land covered with majestic trees. The last full day aboard is fairly cool but it’s wonderful to be in a sunny deck chair, watching for whales and surrounded by such awe-inspiring natural beauty.

There are many options and side trips for the more adventurous offered in each port: helicopter tours and small boat excursions to whale watch, to name a few.

Passengers disembark at the very organized port of Vancouver, with many photos and memories of an unforgettable voyage and perhaps a desire to return and see Alaska in greater detail.